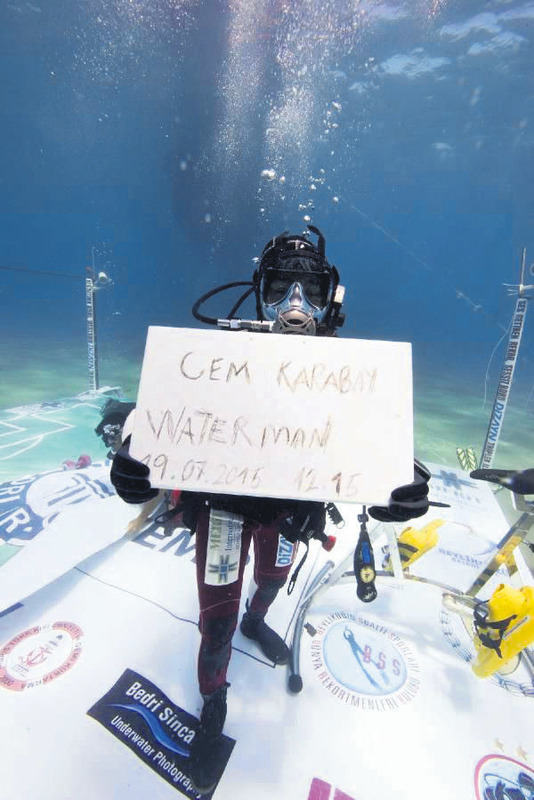 by Emre Diner Jul 20, 2015 12:00 am
Cem Karabay, holder of the Guinness World Record for the longest scuba dive, claims to have broken another world record by spending 72 hours submerged in water.

Karabay wrapped up his stunt on Monday, coinciding with the national day of the Turkish Republic of Northern Cyprus (KKTC) by emerging from 6-meters-deep water off the coast of the Turkish side of the island.

Karabay, 43, plunged into the Mediterranean Sea from a beach in Girne or Kyrenia, which Turkish troops used as a landing beach in an operation on July 20, 1974 to save Turkish Cypriots caught in a conflict with Greek Cypriots.

For three days, he tried to break the longest open saltwater scuba dive record currently held by Egypt's Walaa Hafez, who spent over 51 hours underwater last month. Karabay's record attempt was tinged with local flavors as the Turkish diver satiated his hunger underwater with the country's famous hellim cheese and a type of Turkish Cypriot kebab. Fellow divers occasionally visited Karabay, who played some sort of underwater soccer with them. Kürşat Tüzmen, a former Turkish cabinet minister and an amateur diver, also joined Karabay for a while, playing backgammon with him.

When he emerged from underwater, the Turkey representative of Guinness presented a record certificate to Karabay who was visibly tired, with his face bloated due to exposure to saltwater. The diver said he was out to prove a Turk's strength to the world and succeeded. He pledged to exceed his own record in the future.

He first made it into the Guinness World Records in 2011 for the longest scuba dive in a controlled environment when he stayed inside a pool in Istanbul for over 192 hours in 2011.
Last Update: Jul 20, 2015 11:46 pm
RELATED TOPICS