Strawberry growers return to hometown due to reconciliation 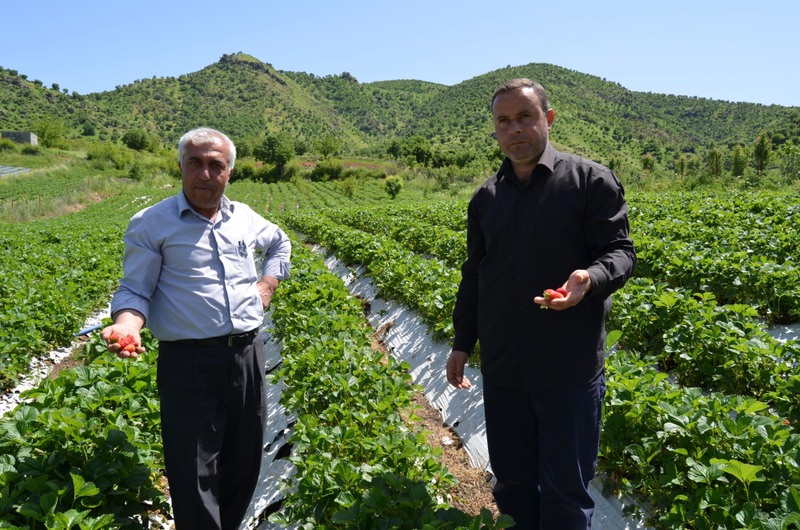 by Anadolu Agency Jul 21, 2015 12:00 am
Thirty families that migrated to various western provinces from the southeastern province of Batman many years ago have returned to their villages due to the reconciliation process that has created a peaceful environment in the region. Thanks to the state support provided to strawberry growers, families that have resettled in the villages of Yeniköy, Cevizli, Umurlu and Köprübaşı in the district of Sason have begun farming once again.

Speaking to an Anadolu Agency (AA) correspondent, Sason Strawberry Growers Association President, Mahmut Doğan, said that if the support continues, other families who migrated to western cities might return to their home towns.

Doğan said that they receive a great deal of support for strawberry production from the Directorate of the Southeastern Anatolia Project and the Directorate of Food, Agriculture and Livestock and added: "Thanks to the support so far, 30 families have returned to their hometowns and have begun growing strawberries. We want all of the families that migrated to other cities to come back. Even if this region does not become an international market for strawberries, it can be a local market."

He said families that migrated to big cities have had a hard time and that it breaks their hearts to see them working in basements in apartments. Highlighting that the land in southeastern Anatolia is very rich and fertile, Doğan said that they must make the most of this land.

He claimed that the people of the region will come back to their hometowns as long as the state support continues for strawberry farmers. "If people are assured of support, they will quit working in the basements of apartments and run to their lands to farm," Doğan said.

On the other hand, the vice president of the Sason Strawberry Growers Association, Şafi Esen, said that strawberry growers are in need of a cold storage depot to protect the freshness of their products. "The demands of the strawberry growers should be met," said Esen, adding: "Currently, some families are returning to their villages. If the state support continues and a cold storage depot is built for the growers, other families will return to their homes and begin growing strawberries in their own fields."
Last Update: Jul 21, 2015 11:15 pm
RELATED TOPICS