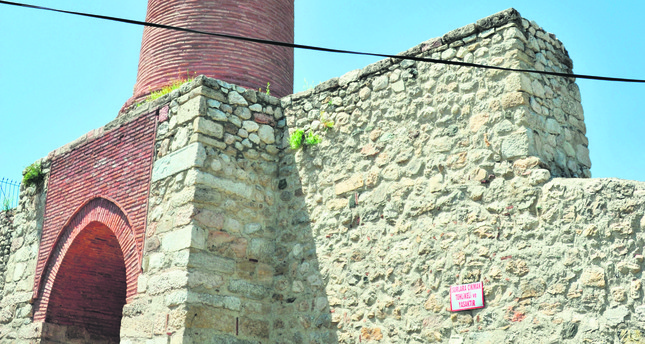 by Daily Sabah Jul 22, 2015 12:00 am
Tokat province's Zile Castle is the place where Roman Emperor Julius Caesar spoke his famous words "veni, vidi, vici" (I came, I saw, I conquered) to notify the Roman Senate about his bloody victory against King Pharnakes of Pontus. However, the famous castle is now facing erosion and destruction. Stones are rolling off the castle walls down towards houses built on the mountainside, making residents around the castle nervous. Zile Mayor Lütfi Vidinel described Zile Castle as one of the most beautiful castles in the world. Vidinel highlighted that the stones falling from the castle walls pose a danger for both people and their property. "Unfortunately, the stones are falling through roofs and into homes. This situation is victimizing our citizens."

Vidinel said they have been working to improve the situation, and added: "We submitted our restoration request to the Culture and Tourism Ministry. We put warning signs in the danger zones as well. The deterioration of the castle walls saddens us greatly, as its historical and cultural richness means a lot to us." Moreover, the mayor said, "I hope that this historical treasure where Julius Caesar uttered his famous sentence will be restored as quickly as possible." Turan Aydın, a resident living near the castle, said some of the stones have fallen through his roof. "We want the castle walls to be restored immediately because right now, they are hazardous," he said. Another resident, Erol Arslan, said he hopes the castle will be restored soon so that the residents can stop fearing for their lives and property.
Last Update: Jul 22, 2015 11:39 pm
RELATED TOPICS