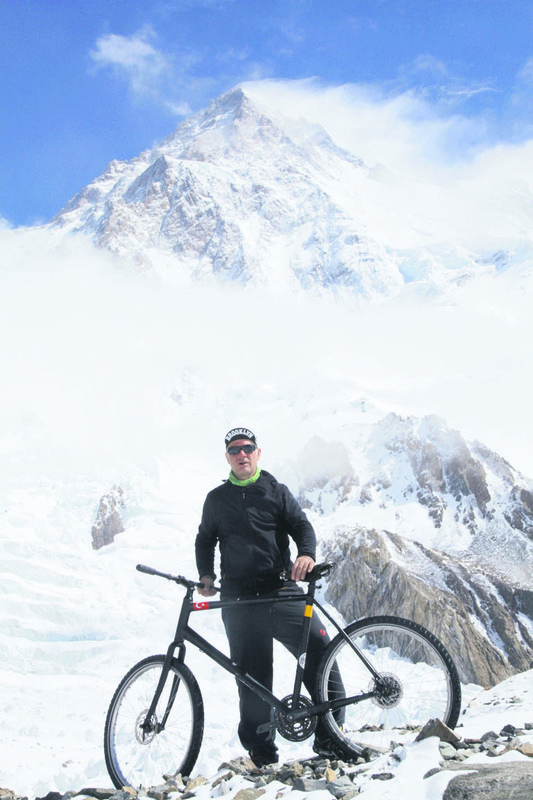 Aydın Irmak is a passionate climber and cyclist who has climbed the most dangerous and challenging mountains in the world and has cycled in many countries. During his journeys he lost four fingers and three toes. Still, he is planning to continue his adventures

Aydın Irmak is a Turkish mountain climber and cyclist who climbed Everest, K2 and Annapurna, where he lost four fingers and three toes. Aydın Irmak moved to the United States when he was 22, and he finished university studies while working as a taxi driver. Then, he established an industrial design business. After the Sept. 11 attacks, he quit his business. For a few years, he travelled across South America and worked both as an actor and a writer. Later, Irmak decided to travel to the North Pole by bicycle and started dancing with death. Even though he couldn't reach the North Pole, he crossed 19 countries on his bike. At his last stop, Nepal, he wanted to cycle up Mount Everest, but state officials did not let him. Therefore, he changed his mind and decided to climb the world's highest mountain on foot.

Three years ago he climbed Mount Everest. Unfortunately, his right hand was badly injured during his journey. He received medical care for three months in Istanbul. Even though most of his hand recovered, he lost four fingers to gangrene. Surprisingly, this injury did not affect his climbing passion. After Everest, he climbed the second highest mountain in the world, K2. As to his journey by bicycle, Irmak started cycling from Taksim on April 13 and pedaled alone until he reached Pakistan's capital, Islamabad, where he met his teammates. Irmak continued on his bicycle for 6,000 meters. He and his group reached the top, which is 8,611 meters high, on July 27 last year.

His next adventure was to Annapurna, the world's most dangerous mountain, which is 8,091 meters high. On March 24 he reached the top. However, the journey was full of obstacles. Irmak explains that they were not able to come back on time. He said, "At a certain moment, where even the tiniest mistake was unrecoverable, the only solution was to stay tied to each other. We had no other choice than to wait for the morning with the fear of death. The team, which started walking at sunrise, was only able to reach the fourth camp in the afternoon. From then on, the struggle for life continued. We passed the night eating ice, although ice could not compensate for the dehydration. The fight against dehydration is as hard as fighting against hunger. Two people of out of 13 lost their lives, and four of us nearly froze to death. Moreover, I lost three toes."

Irmak returned to Istanbul just before the earthquake in Nepal, where he had surgery to have three of his toes removed. Despite all that has happened, Irmak has already set his next target, which is to cycle from Zadar in Croatia to Fethiye in the province of Muğla in Turkey to raise awareness about the protection and conservation of nature.
Last Update: Jul 22, 2015 11:38 pm
RELATED TOPICS