As technology becomes more ubiquitous, women are driving the use of smart devices 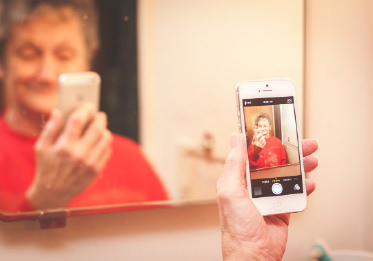 A recent report from the U.S.-based market research company International Data Corporation estimates that 1.6 billion photos will be taken and shared online within this year. Moreover, seven out of 10 photos will be taken using a mobile device. In light of this trend, users will want to share this data across devices in an unlimited, secure and intuitive way

When people retire, they often close themselves off to new developments. They often feel they have achieved all the success they will have during their youth. The fear of trial and error may keep them away from discovering new things. In Turkey, professional life also overtakes people's lives; it tosses them aside as people with no hobbies and passion. People whose ambitions exceed their intellectual and passions may grow older quicker when they retire. However, housewives never retire. They are open to new discoveries at every age, which might help them to adapt to new technological developments more easily.

My neighbor Mrs. Muazzez, who wants to share and watch more videos on Facebook, wants her mobile Internet connection to have a higher download quota. While women live their second spring with technology, men lose their technological abilities for interesting reasons. Mrs. Muazzez is the best example of these kinds of women. She holds onto life with both hands after her husband passed away. Her biggest passion is Facebook and she has more than 10,000 subscribers. Almost everyone knows about the homemade jams she sells on Facebook. Recently, she complained about running out of her mobile Internet download quota too quickly. "My 2 GB quota runs out quickly. I should have the one with 4 GB," Mrs. Muazzez said. When I asked her which apps she uses the most and whether she watches videos online, she said: "I use Facebook the most. I do not watch so many videos but I upload the videos that I take all the time. I also listen to music on YouTube." Although I told her that uploading videos might cause her download quota to run out as well as listening to music on YouTube, she did not seem satisfied. However, she finally understood that she needs to use Wi-Fi.

One of the biggest reasons smartphones are popular is because of their use by women. As women are more open to new developments, they are active users of social media such as Facebook and Instagram. As men think they lose their ability to learn new things when they retire, they are more reluctant to use technology. Women, especially housewives, never retire so they do not experience the loss of self-confidence as men do. The rivalry between their peers and passion for competition keep them alive. Thus, their abilities on social media networks are constantly developing.

The smartphones that grandmothers advise their grandchildren to let go of became social monsters in the hands of the same grandmothers. Moreover, they do not bother turning off the automatic flash when either taking a photo or recording a video. They take out their smartphones as quickly as a swordsman draws his sword at wedding ceremonies and entertainment events as well as when they see a celebrity. They hold their arms up and begin recording a video without even turning off the flash. But how do these women store their all the videos and photos they take and upload them to the Internet? This is one of their biggest problems. Usually, people use different apps connected to servers, also known as the "cloud," in order to store their data. However, one must be knowledgeable to use these apps.

There is no storage space left to take a photo

From now on, you do not have to be upset that your phone's storage capacity is full. A device called iXpand Flash, which is smaller than your finger, is able to store thousands of photos and hours of video. Moreover, the device can be both used on both iOS and Android devices. First, let me address the problems of iPhone and iPad users. The iXpand flash drive is connected to Apple devices via their lightning port and downloads the photos and videos like a magnet. You might find it hard to pronounce the name of the device. If you want to purchase it, just take a photo of the device and show it to the sales people. Be careful to purchase a device with a storage capacity that is higher than you smartphone or tablet. For instance, if you have an 8 GB device, buy a 16 GB iXpand flash drive. You can still use your phone or tablet while the storage drive downloads all you documents as well.

Business life is entirely changing with mobile Internet as well as cloud apps. Sun Microsystems perfectly defined today's office environment with its campaign motto "The Network is the Computer," yet the company was unable to achieve its vision. Evernote is the best example of new working life. Evernote allows individuals to record quick notes. Users can also access documents on Evernote through any device. Recently, Evernote announced a management shakeup. Phil Libin has been appointed as executive chairman while Chris O'Neill, previously an executive at Google X, is the new CEO. These changes seeded the idea that Evernote, which currently has 150 million registered corporate and individual customers, would be an ideal preference for Google to buy. If readers wonder where I came up this idea, I learned more about the company at a developer meeting last year. I met with Libin, who has high intellectual talents, at the Mobile World Congress in Barcelona three years ago. The company has increased its value as well, as many registered customers began to pay. Evernote can be a perfect opportunity for Google, which did not achieve expected success with Google Drive and Google Keep and has now more than 50 percent of premium customers. This assignment also makes me recall the appointment of a Microsoft executive to Nokia.

NEW GADGET - Memory and battery in one hand

When Samsung introduced the Galaxy S6 and S6 Edge, the most attractive features were the aluminum alloy body with a back cover, which does no longer opens. Another important feature was its storage capacity. They both lack SD card support, yet a creative accessory solved this problem. Incipio is a 3700mAh battery as well as a built-in microSD card slot that holds up to 128 GB of storage. When users switch the Near Field Communication (NFC)-powered cases to Storage Mode, they transfer their content like music videos and images to the external flash storage.

START-UP - Technology welcomes you while you shop

If you are familiar with Turkish shopping traditions, then you have probably heard the saying "müşteri vel-i nimettir" (the customer is always right). These days, this tradition continues with technological developments, yet the most important thing regards human attitude. Technology can offer you information about your customers. In this regard, Turkish R&D technology firm Blesh attracts interest with innovative solutions. Making a name in Turkey and abroad with its solutions for Apple-supported Beacon technology, Blesh achieved another success. On July 14, Blesh became one of the first solution partners of Eddystone, an open-source platform alternative to Apple's iBeacon. At the end of 2014, Blesh pioneered software development kits to connect people to the Internet of Things and was the first country that developed Google's Physical Web Beacons and sold them to more than 30 countries in two weeks. Blesh CEO Devrim Sönmez said their technological solutions make them feel confident. "Specializing in technology that can shape the future of the world, and producing and exporting innovative solutions are important steps for Blesh, a young company in its field. It created great pride and motivation for us to be included in Apple's and then Google's ecosystem," Sönmez said. Using Bluetooth technology, Eddystone introduced a new direction to location-based communication and the Internet of Things. Running on both iOS and Android, more details about Eddystone is available at: www.blesh.com, where the product can also be purchased.