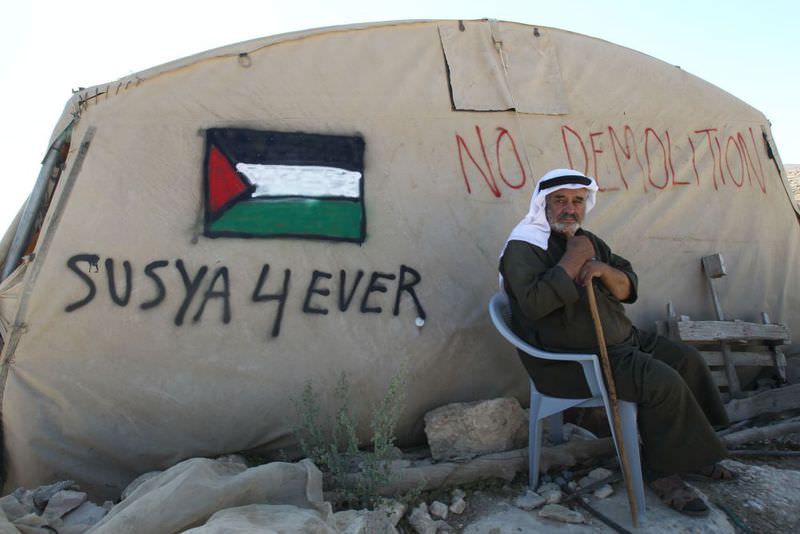 A villager sitting outside his tent in Susya during a protest earlier this month against the village's demolition. The village is largely tents and huts.
by Daily Sabah Jul 27, 2015 12:00 am

The long-defunct Ottoman Empire has come to the aid of a Palestinian village facing demolition by Israel as a title deed from Ottoman times proves Palestinian ownership, a development that may stop the village's evacuation

A title deed dating back to the Ottoman rule of present-day Israel and the Palestinian territories was taken into consideration by Israeli authorities over the disputed ownership of a village in the West Bank. Proof of Palestinian ownership may save the site from demolition after a court approved Israel's plans against the illegal construction of homes in the village, Israeli media reported. Israeli authorities have been looking to demolish Susya, which is situated near an archaeological site, on the grounds that Palestinian locals illegally built houses in the 1980s and challenged Palestinian ownership of the space.

Israel's Haaretz daily reported details of an internal review by the Defense Ministry's Civil Administration Department, which oversees demolitions. The review points to the authenticity and validity of an 1881 title deed to the Palestinians' ownership of the village, dating back to the era when the Ottoman Empire ruled the territories before the British mandate.

The review surfaced one month after Israel's Supreme Court, assessing an appeal by Palestinians, ruled that the Civil Administration Department might go ahead with the demolition of houses Palestinians built as they were built illegally. Villagers, on the other hand, argue that Israeli authorities refused to issue building permits despite their requests after they were forced to evacuate their dwellings on the nearby archaeological site. The Civil Administration Department defended itself, saying that the Palestinians lacked any title deed that would prove their ownership of the place, which would enable them to receive permission to construct houses.

Israel had delayed the planned demolition to an unscheduled date after the Muslim holy month of Ramadan, which concluded 10 days ago. Acknowledgement of the Ottoman title deed may not halt the demolition, as the deed only covers land ownership, not building ownership, but the new finding may at least stop the evacuation of Palestinians from the village.

Susya witnessed protests after the court ruling. Hundreds of Palestinians accompanied by Israeli activists staged rallies against what they called "a symbol of the Israeli occupation of Palestinian lands."

Following the Six Day War in 1967, thousands of Palestinians were displaced from their homes.

Human Rights Watch has branded the Israeli High Court's ruling as a "grave breach" of Israel's responsibilities toward Palestinians living under its military rule.

Palestinians in the area where Susya is located are largely deprived of the right to build new settlements due to strict Israeli regulations complicating property ownership for Palestinians. According to media reports, only 206 permits were issued in the past 14 years.

Palestinians, complaining of Israeli pressure on land ownership, are already entangled in a series of lawsuits over ownership of their properties dating back to the times before the foundation of Israel in 1948. They sometimes turn to well-preserved archives of the Ottoman Empire, which once ruled present-day Israel, Palestine and much of the Middle East for centuries, though they are required to go through a lengthy legal process. Kudret Bülbül, head of the Prime Ministry's Directorate of Turks Abroad and Related Communities (YTB), recently announced that the Ottoman land registry archives were opened in their entirety to Palestinian litigants pursuing property claims. The YTB will scan the archives for all documents related to Palestine and hand over copies of requested documents to Palestinian litigants in relevant cases. The agency will also check the Ottoman archives in other countries for documents related to Palestine.

The use of Ottoman archives to prove Palestinians' property claims was most recently at the center of a lawsuit over the ownership of residences in an East Jerusalem neighborhood. Palestinian families facing eviction from the neighborhood were given access to Ottoman archives to prove that the area they live in belonged to Palestinian families. Several families were evicted from the Sheikh Jarrah neighborhood in 2009 after the court ruled in favor of Jewish families who claimed they had title deeds dating back to Ottoman times, which showed the land was bought by Jews. Palestinians claimed the deeds were forged.
Last Update: Jul 27, 2015 8:33 pm
RELATED TOPICS