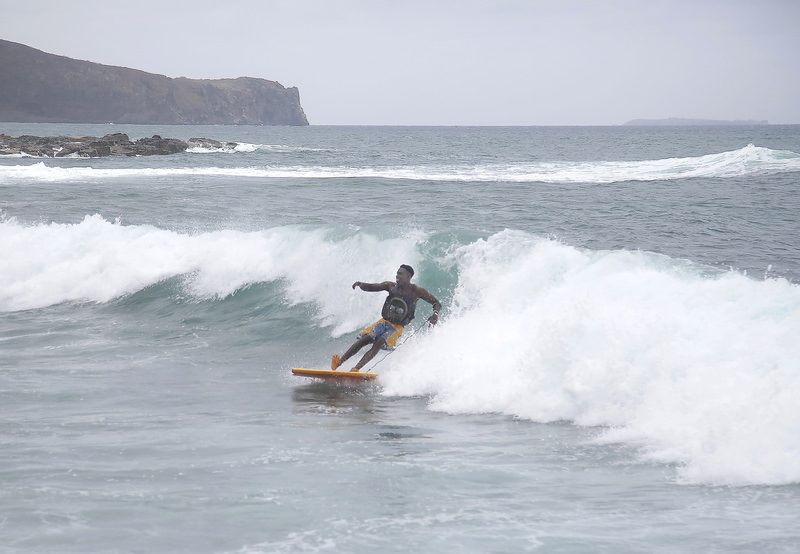 by Daily Sabah Jul 27, 2015 12:00 am
Senegal's shores on the Atlantic welcome local and international surfers throughout the year. Sports enthusiasts from every age run to the shores early in the morning in order to catch the first waves of the day. One of the first Senegalese surfers, Omer Seye, 38, who has won titles at many international competitions, told an Anadolu Agency (AA) correspondent how he began surfing. "I began surfing about 20 years ago to pass the time while I was working at my uncle's restaurant. In time, I realized my talents and worked harder. I went to France, found myself a sponsor and took part in many competitions," Seye said.

When Seye become a recognized surfer, he returned to his country and began sharing his experience with young surfers. He later founded the "Rip Curl West Africa Surf Tour," which is a competition where the best surfers in Africa compete. Stressing that surfing began in Hawaii and came to the shores of Senegal 20 years later, Seye said: "Right now, we do not have high-level surfers, but we believe that we can close the gap in a very short time. In the near future, there will be many successful African surfers competing at the World Surfing Championship."

Seye also said the shores of Senegal welcome many surfers from Africa as well as other continents as they are well suited for surfing. Highlighting that the Senegalese often fear the sea and the waves although they are living in a country that has a coast on the Atlantic, Seye said most of the Senegalese who surf belong to the Lebou tribe, which lives near the coast. He said they need to better familiarize the Senegalese to water in order to develop surfing in the country.

Seye has a surfing school in Dakar, the capital city of Senegal, and he is training a total of 40 people from many different age groups, both locals and internationals, at his school. "The best season to learn how to surf in Senegal is the summer. However, professionals prefer Senegalese shores in September and March as the waves increase up to five meters during these months," Seye said. One class at Seyes surfing school costs 15,000 West African CFA Franc ($25.31), but the experienced surfer said that if somebody wants to learn surfing and he or she does not have any money, they do not have to pay anything. "Senegal will become known for its surfers and surfing facilities in the future. We just need help from NGOs [nongovernmental organizations] for water and landscaping," Seye said.
Last Update: Jul 27, 2015 11:15 pm
RELATED TOPICS