Thanks to Turkish Airlines, five-year-old US girl who's losing sight gets to visit Rome 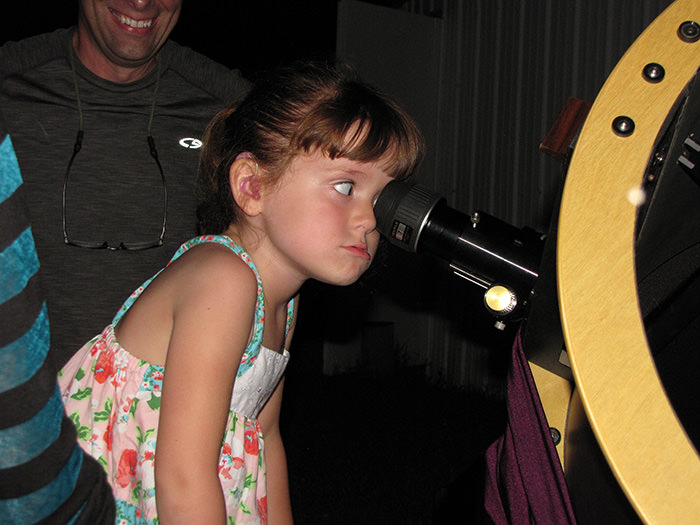 Elizabeth u201cLizzyu201d Myers, 5, gazes through a telescope at the Warren Rupp Observatory in Bellville, Ohio (AP Photo)
by Associated Press Aug 07, 2015 12:00 am
The parents who created a "visual bucket list" for their five-year-old daughter who's slowly going blind started by showing her wondrous sights close to their Ohio home. They never dreamed she'd get to see Rome someday.

Elizabeth "Lizzy" Myers and her family will travel to Italy sometime next spring thanks to Turkish Airlines, whose general manager was touched by the little girl's story and her parents' wish that she see many amazing things before a rare genetic condition robs her of her sight, or most of it.

The airline offered up round-trip tickets to anywhere in the world, and the family chose one of the most visual places they could think of.

"We felt both felt Lizzy would enjoy seeing the artwork and the statues, and possibly seeing where my wife's family is from, which is south of Rome," said Lizzy's dad, Steve Myers, 42.

Lizzy was recently diagnosed with Usher Syndrome Type II, which causes hearing and progressive vision loss. Her parents have five to seven years to get her out to see things, especially at night. Recently she visited an observatory near their home and saw a production of "Mary Poppins" at a local theater.

"This was about helping a little girl who may never have the chance to see the world," Turkish Airlines' general manager Tuncay Eminoğlu said.

Steve Myers said he was uneasy and reluctant when people started coming forward and offering money and other things to the family after their story was first featured in a local newspaper last week. But he said they couldn't pass up the chance to take Lizzy somewhere they couldn't have visited otherwise.

"We're just trying to cram as many things in her mind as possible," he said.

For Lizzy's part, she doesn't know what is beginning to happen to her sight, and her parents haven't attempted to explain it to the happy little girl who's still deciding if she wants to be a princess or a mermaid when she grows up.
Last Update: Aug 07, 2015 3:51 pm
RELATED TOPICS