Despite high price of meat, steakhouses in high-demand in Turkey 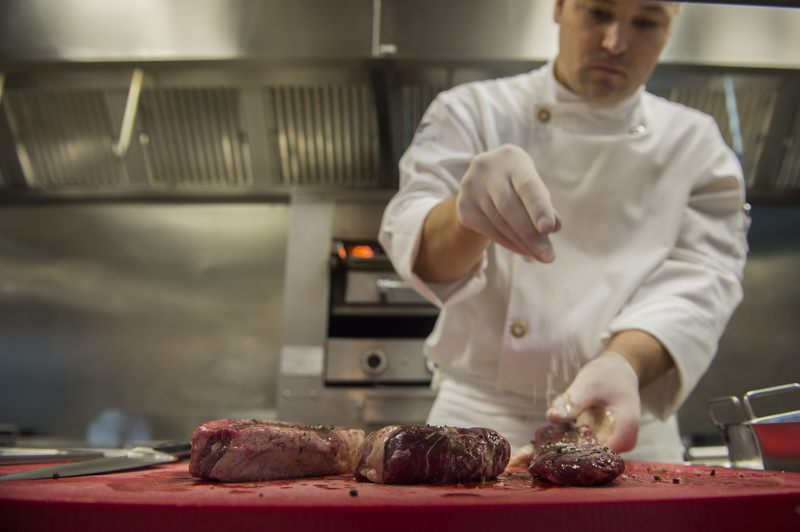 The price differences between steakhouses offering delicious red meats cooked and presented with distinct styles and traditional restaurants, as well as supermarkets and butchers is raising concerns these days, as many chefs at luxury meat restaurants claim that butchers cannot offer the best cuts of meat to customers.

While the demand for steakhouses increases day by day, all eyes have turned to the Central Bank of the Republic of Turkey's (CBRT) inflation report, with meat prices attracting attention. In supermarkets, a 1-kilgram fillet steak is sold for TL 72 ($25.8) followed by beef casserole at TL 40 and minced meat at TL 37. Butchers sell fillet steak for TL 65, beef casserole is TL 40 and medium-fat meat is TL 35.

At traditional restaurants, a 300-gram fillet steak costs between TL 35 and TL 40, while a 500-gram T-bone steak including both fillet steak and loin is between TL 45 and TL 60 at steakhouses. Similarly, between 250 and 300 gram "lokum" meat, which is cooked from the middle part of fillet steak, currently costs TL 50. In other words, 1 kg of meat at traditional restaurants is twice the price of a butchers'. At steakhouses, customers pay nearly three times more for 1 kilo of meat. Speaking to Anadolu Agency at a luxury meat restaurant in Ankara, Executive Chef İsmail Güler said that the price difference between steakhouses and butchers emerges from the service and the type of meat. "Our efforts and what we serve our customers are worth paying this price," he said. He said that their customers generally want to taste high quality and finely presented meals. "When meat prices increase, meal prices also change. Yet we try to maintain our standards and meet our customers' expectations. I do not think there is a decrease in customer numbers at steakhouses, even though meat prices are higher," he said. Güler said that if more unique methods are designed, then the steak house share will increase up to 20 percent within 10 years. He went on to say that the amount of available high quality meat is not enough for steakhouses. Güler said that they choose meat from animals grown in meadows and follow their growth. Chefs separate different parts of meat and they undergo two periods, one of which is 27 days, while the latter takes 72 days. He said that they do not marinate meat, but prefer suitable cooking methods for the best taste and softness. Güler said that meat covered with their own tallow is kept under ultraviolet light in a special room. He said this method allows them to offer the best quality meat without harming it."I do not believe that local butchers mostly use the valuable parts of the meat. Actually, I think these parts are just disappearing. Butchers do not really know which meat should be separated from the carcass. Most of the special meat of the animals gets lost in minced meat," said Güler. He claimed that some people have begun to raise their awareness on the matter over the last three or four years, but Güler thinks that the meat that is sold in Turkey will be of higher quality if an educational program is prepared. Highlighting the quality of the meat is relevant to its fat rate, Güler said people usually want fat-free meat. However, meat should feature 20 percent fat and 80 percent meat.

Güler said that people first check the color of the meat before purchasing anything from the butcher and continued, "You should buy a piece of meat that looks shiny and fresh. If they can touch the meat, chose the softer one. My most valuable piece of advice is that people should find their own butcher. Buying meat from some place you can trust is the most reasonable kind of shopping."He said that the softer and less sinewy meat from cattle is fillet steak. He said that there is not that much meat on the back of these animals, which makes this meat very valuable. Güler said that Turkish people usually love "well-done cooked meat" as they do not want to see any blood in the meat. "However, rare cooked meat has a lot of water, which enhances the flavor of the meat compared to well-done cooked meat," said Güler.

He said that Turkish people's red meat eating habits have changed over time. "According to my observations over the last four years, people visiting steakhouses and those who prefer rare cooked meat has increased by 30 percent compared to those who love their meat well done. Over 10 percent of steak house customers in Turkey prefer their meat cooked rare," Güler spoke.

Chef Güler also gave tips for processing meat during Eid Al-Adha (the Festival of Sacrifice). He advised people not to cook meat as soon as they sacrifice the animal. "If they wait for two or three days, the meat will be softer, which enhances its flavor. People usually make 'kavurma' (braised meat) during Eid Al-Adha. Some people make it with onions, pepper and tomato along with the meat's own juices. If they make it with a hot pan and reduce the liquid, it will be more delicious," concluded Güler.
RELATED TOPICS