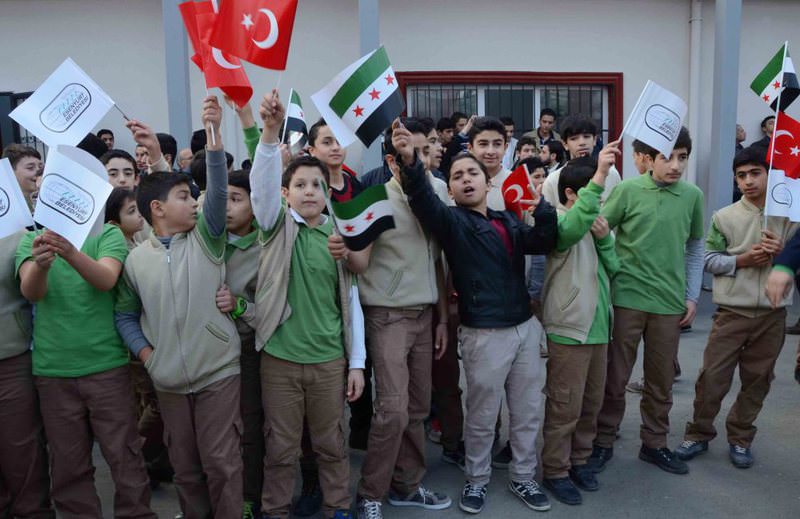 by daily sabah
Aug 11, 2015 12:00 am
A school offering intensive education to Syrian children refugees in Hatay's Reyhanlı district is managed via Skype. U.S. radio broadcaster NPR introduced the school, which is surviving thanks to donations from Canada and the U.S., as a success story in one of its recent broadcasts. On its social media platforms, UNICEF also described the school as one of the few intuitions that offer education to Syrian children refugees taking shelter in the region. Currently residing in Montreal, Syrian pharmacist Hazar el-Mahayni, 63, is the founder of the school.

When the ongoing Syrian crisis began in 2011, Mahayni decided that compared to food, clothing or arms, education would be the best service that will help the 2.6 million Syrian students. He rolled up his sleeves and began collecting donations in the U.S. to establish a school that will train the future of Syria. Every day at 4:00 a.m., he gets up and connects to the school via Skype to talk with deputy school executives. Mahayni said the school's expenses amount to $50,000 per month. Certain funds were also cancelled when the Syrian war entered its fifth year. Within this period, only three refugee schools among 19 are left in Reyhanlı. The school instructs 2,000 students in Arabic, Turkish and English.

The school is giving every effort to remain open while the number of refugees rises. Refugee students also receive sports and computer training, while senior students are informed about bursary applications. The school reminds its students that hope is the most important part of their education. Only 2 percent of Syrian refugee youth were able to enter universities although the government provides financial aid and university fees are not obligatory for refugee students. Mahayni said students were very pessimistic at first, but they significantly improved themselves and their outlook.