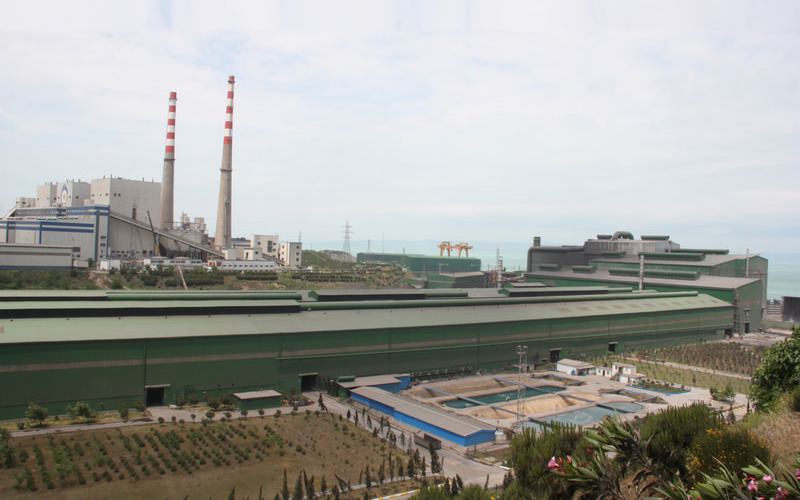 An iron and steel company in Çanakkale protects the sea ecosystem with a nature park where waste water coming from a hydroelectric facility is used to farm seabass, seabream and turbot in pools

Operating since 2003, the İÇDAŞ A.Ş. iron and steel company's facility in Çanakkale's Biga district stands out with its environmentally friendly investments that aims to prevent air pollution and protect the sea ecosystem, as the facility is located in a coastal area and uses wreckage as raw material. Listed as sixth among Turkey's biggest 500 industrial establishments, the facility, which employs 5,500 and produces four million tons of steel on an annual basis, also includes a nature park.

To avoid pollution, some staff members said they use state-of-the-art technology in their production process. Interestingly, waste water coming from a hydroelectric facility is used to farm seabass, seabream and turbot in special pools. With it environmentally friendly investments, the facility, which is the biggest iron and steel production facility that includes an arc furnace in Europe, has received 15 national and international awards. The staff stressed the facility's water resources are taken entirely from the sea, adding that a special desalination system was built to transform seawater into drinking water.

In 2008, hydraulic turbines were established on a discharge line of cooling water at the plant. One year later, the facility was taken over by the company to produce electricity from seawater. Around $15 million was invested in the facility, and the total power output of four hydroelectric turbines is 6,000 kilowatt hours (kwh). Considering the annual average electricity consumption per person is 2,490 kwh, the facility produces energy on its own without creating carbon emissions. It also complies with the necessary production and regulatory conditions.

Operating in the fields of energy, steel and shipbuilding, the staff underlined their sensitivity toward protecting wildlife and the sea ecosystem. The officials said they detected 271 animal and 136 plant species in the sea and forest ecosystems where their facilities operate, and stressed that the Bekirli Thermal Power Plant was chosen as one of the best sustainability projects in Turkey by the Development Ministry as a part of the Sustainable Water Management Project.

Facility officials said the Bekirli Thermal Power Plant has been employing a SWFG system, which has been used in prominent thermal power plants around the world for the last six years. They added that the system cost $300 million and claimed that it is considered the latest environment-protecting technology. The officials reported that İÇDAŞ A.Ş.'s 60 megawatt wind power plant is currently under construction, thanks to the company's $120 million investment in wind power.

Highlighting the fact that they provide 5.6 percent of the electricity produced in Turkey, they underscored that the second unit of the Bekirli Thermal Power Plant was recently officially inaugurated. Each unit of the power plant produces 618 megawatts of power and the total capacity of the power plant is 1,236 megawatts. The officials added that solutions for Turkey's energy problem can be developed through such global projects.

Apart from their clean production applications, İÇDAŞ A.Ş. also invests in and provides venues for sports, archaeological excavations, meetings and concerts. The company, which is sponsoring the archaeological excavations in the Ancient City of Troy, Çanakkale's world-renowned archaeological site, also supports the excavations at the Apollon Smintheus Temple in Ayvacık district's Gülpınar village and the Ancient City of Parion in Biga district's Kemer village. The company also has a sailing sports club run by company staff, and İÇDAŞ A.Ş. annually trains 300 sportspeople. A congress center and a vocational high school under construction are among the company's social responsibility projects.
RELATED TOPICS