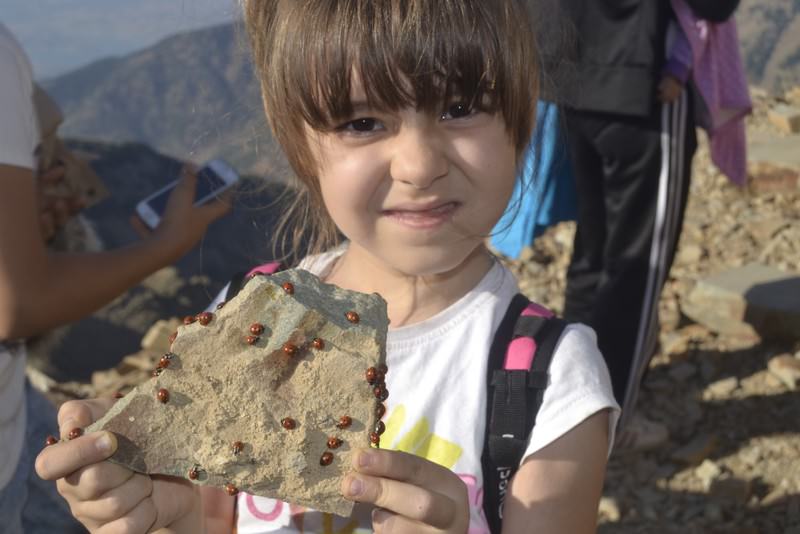 by Daily Sabah Aug 19, 2015 12:00 am
Ladybugs migrate to the 2,273-meter-high Çimen Mountain in Kahramanmaraş every year in order to reproduce. Flying to the top of the mountain, ladybugs paint the hills red. Discovered by chance on Uludaz Hill in 2007 by photographers, the ladybugs offer a visual feast while migrating.

The migration of the ladybugs, which usually live under rocks and stones, begins in June. They spend the winter on Uludaz Hill and fly towards the footsteps of the mountain when it is time for them to reproduce. Many photographers and nature lovers flock to the region in order to see the ladybugs that stay on top of the hill for six months. As the ladybugs have become the symbol of the region, a festival is being organized every July in honor of their migration.

Additionally, a study initiated by Kahramanmaraş Sütçü İmam University and the Kahramanmaraş Governorate to examine the ladybugs continues. Speaking to an Anadolu Agency (AA) correspondent, Assistant Professor Özlem Kalkar Güven of Süleyman Demirel University's Faculty of Agriculture said she began working in Kahramanmaraş about a year ago and published their study on ladybugs in the European Journal of Entomology.

Stressing that many ladybugs migrate to Uludaz Hill of Çimen Mountain every year, Güzen said the bugs start being seen at 1,900 meters, but their numbers increase at 2,273 meters.

Güven said although the ladybug population declines in April and May, their numbers increase in June once the new generation hatches. "Ladybugs mate in spring and later they lay eggs. During this time, they store nutrients in their bodies. Most of them hide under rocks or tree bark, but some of them migrate to other places similar to Uludaz Hill. Their life cycle is one year. They usually prefer this region as it is protected from the wind and there are many rocks. They feel safer under the rocks," Güven said.
RELATED TOPICS