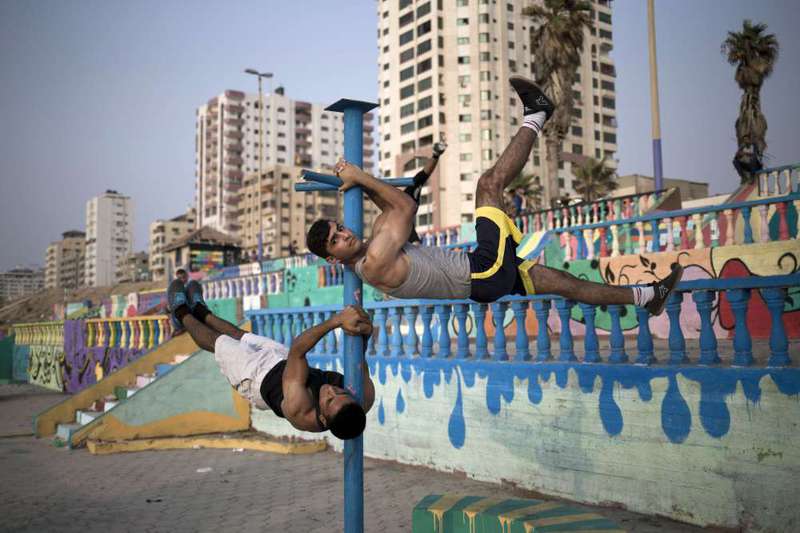 by Aug 19, 2015 12:00 am
Face taut, muscles bulging, his rigid body suspended horizontally in the air on a pole, Bakr al-Makadmeh's "street workout" showcases the urban bodybuilding making ripples in Gaza.

With passersby looking on as they enjoy the relative cool of late afternoon on the Gaza beach, the 23-year-old Palestinian carries out a series of exercises with ease as he calls the names in English, alternating between the "human flag," "back and front lever" and "muscle up".

"These moves, you can't learn them in just one day, it took me six months to get them right," he says before dismounting from the bar he improvised with his group.

The rusty metal pole is held up by two other wobbly poles supported by sandbags branded "UNRWA" - the United Nations agency responsible for Palestinian refugees.Makadmeh works 12 hours a day at a motorcycle spare parts shop, "but every other day we get together in the evening for two hours of street workout," he tells AFP.

For nearly a year he has been training with other young Gazans in the sport inspired by a Swedish fitness trend, which he discovered through YouTube videos.

Summer or winter, their team -"Bar Palestine"- can be found on the enclave's Mediterranean waterfront.

"Most people who pass by are happy to see us, they appreciate it and young people want to know how to join us," says Eyad Ayad, a 21-year-old student.

But not just anyone can master the rigours of street workout, its Palestinian practitioners warn.

"It started off with 20, now we are just four," Makadmeh says of his group.

Suleiman Taleb, a 21-year-old teaching student, is one of the group who has persevered.

He soars over the bar, swinging around it and performing pull-ups before dismounting with a back flip.

He says his athletic background, which includes parkour - the urban sport combining running, acrobatics and gymnastics - helped make his body "ready for the effort".

"We are the first street workout team in Palestine," he says. "In Gaza, despite the blockade, despite the wars and everything we've been through, you can live like anyone else and innovate," he says.

Taleb then joins Ayad and Mahmud Nasmane, already suspended on the bar, and with short straps suspended from their necks the three form a human pyramid in the air.
RELATED TOPICS