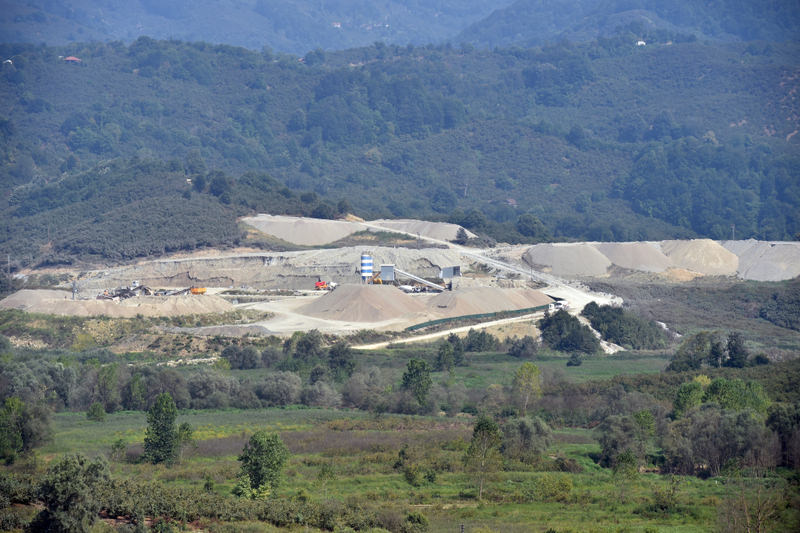 by Zeynel Yaman
Aug 20, 2015 12:00 am
While the construction of Melen Dam is wrapping up, people who have to migrate from the villages in the dam's path feel sorrow and anxiety stemming from having to leave their land.

The Melen Dam, which is located in the northwestern Düzce province close to Istanbul, will be 124 meters high and will have a sand-filled volume of 2,080,000 cubic meters when it is finished. Regarded as the second-biggest dam project following the Southeastern Anatolia Project (GAP), the TL 214 million ($73.98 million) Melen Dam is expected to end Istanbul's water supply problems by the end of 2017 with its 694 million-cubic-meter water storage capacity.

The houses and other estates that will be submerged under the water storage basin of the dam have been notified and evacuated. Area locals received the expropriated price and established new lives in the nearby districts and provinces, and all buildings in the area began to be demolished last year. Only a building for basic needs and a mosque were not demolished. However, the previous residents of the area continue to visit the construction area. They either come to the construction site to see the places where they used to live or harvest their hazel trees. Farmer Yılmaz Angın, 57, harvested his farm for the last time before it is submerged. Although the expropriated prices of these fields were paid, the authorities allowed farmers to harvest their crops for the last time.

People who settled in Düzce's Ortaköy village and the surrounding villages after leaving their houses in Caucasia, the eastern Black Sea region and the Balkans following the Russo-Turkish War of 1877–1878 had to migrate once again due to the dam's construction. The remaining locals of the region are hesitant to leave the land where they grew up. Hüseyin Abay, 65, moved to Adapazarı because he had to leave his house and village where his family had lived for three generations. He is currently living in a one-room building that he built on his hazel tree field and comes to the coffeehouse of the village to pass the time. "It is not easy to leave all the memories behind," Abay said. "We had to leave our town with tears in our eyes."
Last Update: Aug 20, 2015 10:08 am