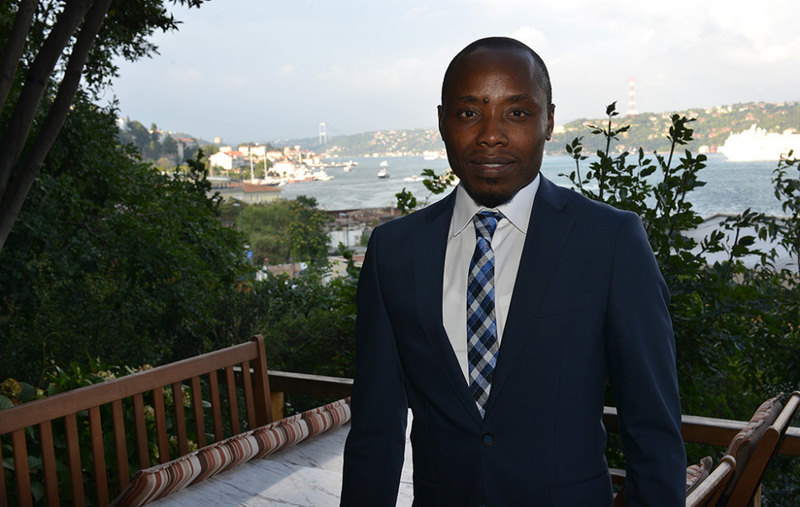 by Daily Sabah Aug 26, 2015 12:00 am
The Turkish Language Scholarship Program, which was initiated by the Prime Ministry's Presidency For Turks Abroad and Related Communities (YTB), graduated its first students. During the ceremony, Jeam Emile Nobola, an officer from Cameroon's Ministry of Foreign Affairs, received his diploma as the only officer and diplomat in Cameroon's ministry offices who knows Turkish.

The program welcomed 14 trainees from 14 different countries who are serving as diplomats, academics, government officers and bureaucrat in their own countries. The trainees received nine-month Turkish language education at Istanbul University. The new graduates were recently granted their diplomas by Associated Professor Kudret Bülbül, the President of YTB.

Cameroonian Nobola said that he turned into a tea-junkie during his stay in Turkey, added that he drank at least 10 cups a day. He said that he had the chance to study Turkish culture closely and expressed his happiness about learning Turkish.

Nobola also offered insights about their practices and everyday life during his stay in Turkey. "I always listen to the Turkish news on the radio and watched the news bulletin on the TV every evening. Also, talking to my neighbors in my apartment in Mecidiyeköy made it easy to practice my Turkish," he said.

He underscored that there are no Turkish speaking bureaucrats or government officers in Cameroon despite the fact that many Turkish business men reside and do business in their country. He said that they communicate with Turkish people living in Cameroon and officers of the Turkish embassy in French and English. Nobola said that the official correspondence between Cameroon and Turkey will be carried out in Turkish as he now knows the language. "I will teach Turkish to the other officers in my department once I return to my country," said Nobola.

Nobola also began to enjoy Turkish culture during his stay. "I love singer Mustafa Ceceli and his song 'Hüsran' (Frustration). I watched Turkish director Çağan Irmak's films and now I am trying to read Orhan Pamuk's book 'My Name Is Red' with the help of a Turkish dictionary," he concluded.
RELATED TOPICS