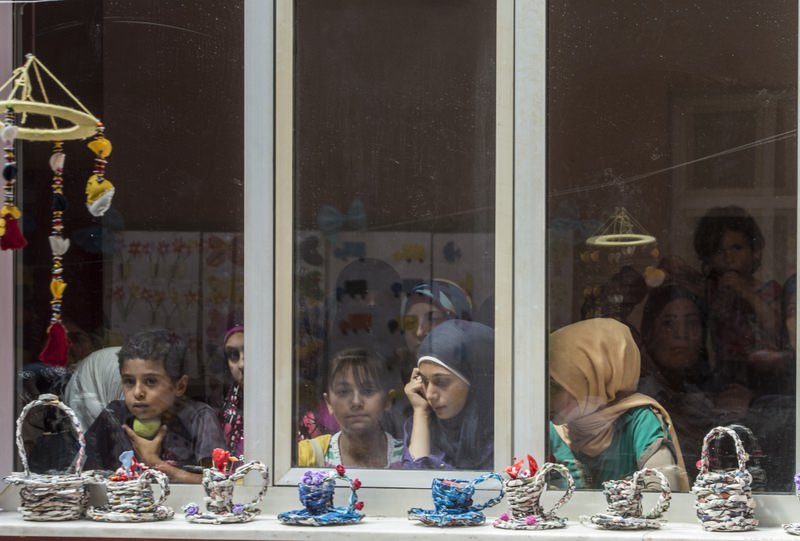 Due to cooperation between a number of Turkish NGOs and state foundations, 3,000 Syrian refugees, mostly women who lost their husbands, are being offered vocational and Turkish language courses that can help create job opportunities for them. Syrian instructors with different professional backgrounds, such as lawyers, physicians offer the trainings to help them regain their hope

A certificate ceremony was held for the refugees taking Turkish language and professional training courses at Sıdıka Kınacı Primary School in the district's Barajlar Neighborhood. Speaking to Anadolu Agency (AA), Şefika Biçer, the head of the district's National Education Directorate, said Altındağ hosts almost 30,000 Syrian refugees, as rental prices are affordable. Underlining that women and children are the most vulnerable victims of the war, Biçer said: "As a woman, I prioritize the training of women and children in order to protect them from unjust treatment. Some of these women lost their husbands and resorted to fleeing from their homes on their own. We are making every effort to ensure their stay is more comfortable and enjoyable."

Since November, 1,600 students have been accepted to the professional training program. Syrian trainers with different professional backgrounds, such as lawyers, physicians and engineers, offer the trainings to help them regain their hope. Biçer said special regulations were enacted to govern the Syrian students' education. "Syrian students take courses with Turkish students at local schools, while at other schools, Turkish students take courses from morning to noon, while Syrian students come from noon to the evening," Biçer added. She stressed that other courses were opened for Syrian refugees seeking jobs as well. With the contribution of the governorship, trainees and students were given Turkish course books. Moreover, almost 800 Syrian refugees have participated in professional training courses at three schools, while 549 of them received certificates.

"Our Syrian guests have learned Turkish. Vocational courses create job opportunities for them. God willing, we want to continue hosting our guests in the best way possible and increase the number of courses," Biçer said. He added that they planned to extend the content of the courses and help the Syrians integrate into Turkish society. Biçer also talked about the plan to continue Syrians' education in new schools apart from the three schools that have been already been providing education to them.

To enable Syrian women to easily continue their education, children's activity classes were opened at Sıdıka Kınacı Elementary School. Children are learning Turkish by watching cartoons, and Biçer said they are trying to erase the traces of war. On the other hand, Principal Ercan Yılmaz said, "Syrian children deserve the sound of music instead of the sound of bombs. As teachers and educators, we are trying to do everything we can."

Following the statements, Biçer handed out the certificates to Syrian women and children who attended the courses. Rashe Almaes, 12, from Aleppo said he loves his teachers as well as the school. Almaes, a seventh grader, thanked everyone for their help. Rada Derviş, who attended vocational and Turkish language courses at the school, expressed his happiness, and said the teachers teach concepts in the easiest way possible during the courses. Seher Yüksekcan, one of the Turkish teachers, said they aim to teach Turkish within two months.

The Syrian civil war has now entered its fifth year and has caused the deaths of more than 250,000 people including at least 10,000 children with at least 60,000 missing. The war has also displaced nearly 10 million people, include 7.2 million displaced in Syria as well as 4 million Syrian refugees abroad. Turkey is sheltering almost half of those refugees abroad.
Last Update: Sep 10, 2015 1:00 am
RELATED TOPICS