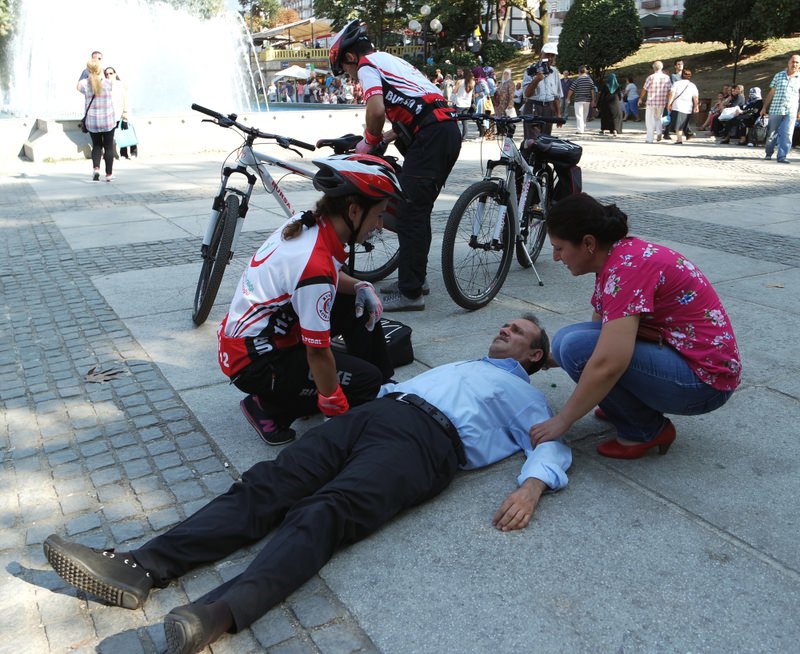 by Anadolu Agency Sep 15, 2015 12:00 am
Founded in the northwestern city of Bursa, "112 Acil Pedal" (112 Emergency Pedal) teams on bicycles offer medical services to people in places where ambulances have trouble navigating due to heavy traffic.

Speaking to Anadolu Agency (AA), Bursa's director of health, Özcan Akan, said there are a lot of people in and around Ulu Mosque, especially during summer when tourists come, for instance. He said they race against time in the case of an emergency, and stressed: "That is why immediate medical response is important. The local people asked us to find a solution for the places where ambulances cannot access or drive through quickly. These regions were in need of mobile medical teams. From now on, emergency medical teams with bicycles will offer medical services to people."

Akan said these mobile teams will respond to all emergencies, from heart attacks to any other major or minor health problems, adding they have already received positive feedback from the locals. He also gave additional details about "112 Acil Pedal:" "We already have a station in the region, and several teams are assigned to this station. When there is a call, these teams, which include paramedics and emergency medical technicians [EMTs] get on their bicycles to respond if an ambulance cannot reach the address. The teams are responding very fast, avoiding any unnecessary delays. If there is any need for an ambulance following the response of the bicycle teams, they call for a vehicle and transfer the patient."