Career academy for people with Down syndrome produces first graduates 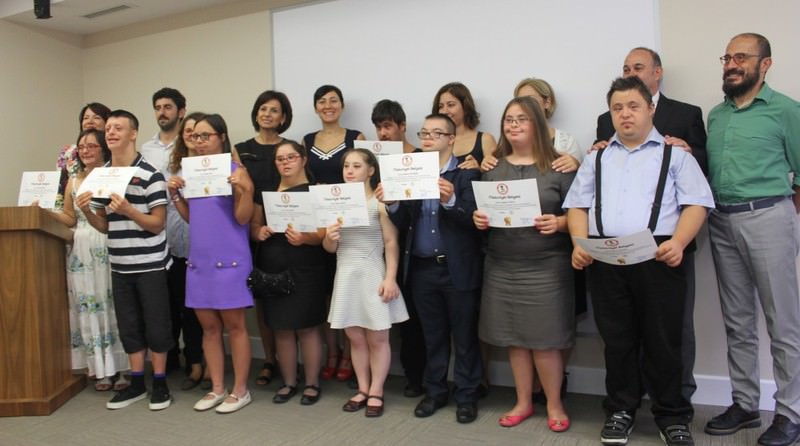 Pioneered by Turkish retailer Bimeks and the Down Syndrome Foundation, an academy that aims to offer skills and career development to people with Down syndrome, including how to use public transportation, shop on their own, create a CV, learn job interview skills, appropriate workplace behavior and how to dress, has produced its first nine graduates

To help young people with Down syndrome take an active role in their social life and earn a living, "Bimeks Down's Türkiye Kariyer ve Bağımsız Yaşam Akademisi" (Down's Turkey Career and Independent Life Academy) produced its first graduates at a ceremony held at Bimeks's Istanbul headquarters. Initiated by tech retail chain Bimeks and the Down Syndrome Foundation, the academy provides courses to people with Down syndrome who gain self-confidence and behave more independently in daily life. Nine graduates received their certificate this year.

In his speech, Akgiray said their project originated with the employment of a young man with Down syndrome at a Bimeks store four years ago. Saying that their first employee with Down syndrome was named Ömer, Akgiray stressed that he was happy to work with employees with Down syndrome, especially as they make all the staff happy. "He contributed to the store's management. After this, we contacted the Down Syndrome Association. Our company hired additional staff with Down syndrome for other branches," he said. Akgiray added that they wanted to hire them, which made them happy. "We wanted to do a good deed," he said. Even though they do not work for Bimeks, the Life Academy was designed to help adapt people with Down syndrome to social life. "Following their training, they can stand on their own feet, go to the work by themselves and fulfil their needs," Akgiray said.

Ekmen said the association received special support and training from Italy for this project. Ekmen underscored that they cooperated with Bimeks as part of a business coaching program. Recalling that many young people were employed at Bimeks stores, Ekmen said the association shared their idea about the Life Academy with the company with the aim of making a greater contribution to people with Down syndrome.

The academy is only a year old, and its new graduates will be offered jobs, Ekmen said, adding that all courses are free of charge. Participants learn how to use public transportation, shop on their own and create a CV as well as learn job interview skills, the necessary behaviors at a workplace, how to dress and use money effectively. They also learn to establish good relationships with their friends. Ekmen said the academy plans to produce 12 graduates next year. Pointing to the importance of becoming a role model instead of producing a high number of graduates, Ekmen said they are conducting pilot studies both this year and next year to evaluate the program's effectiveness. "We will reach our objective when we make our project more accessible, as we can offer more employment opportunities for more young people with Down syndrome," she added.

Talking about changes among the graduates, Ekmen said Life Academy increases the participants' self-confidence. She said they took an important step in becoming more independent people as well. "They now believe in success and are motivated. Their families also give them more freedom. Many parents are overprotective of their children with Down syndrome or mental disabilities. Unconsciously, they restrict their children's life," she stressed. When families see how their children can accomplish something, they allow them to act more freely, Ekmen continued. She said people with Down syndrome can gain academic, cognitive and motor skills by exerting great effort. "When people believe in themselves and understand what they can archive, all doors open to them a lot easier," she concluded.
Last Update: Sep 19, 2015 1:26 am
RELATED TOPICS