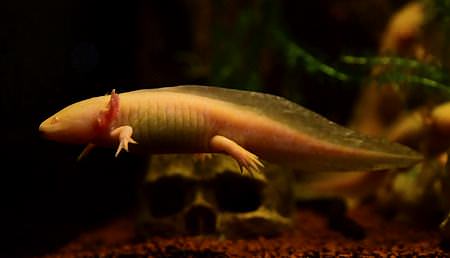 by Anadolu Agency
Oct 02, 2015 12:00 am
Founded in the southern province of Antalya to offer alternative tourism destinations, Wild Park shelters 70 different tropical animal species and has welcomed 250,000 tourists this year. Situated within Antalya Aquarium, the park unveils the wildlife of rainforests and the mysterious world of deserts and caves. Visitors have the opportunity to see endangered animals from Africa, the Americas, Australia, the Amazon and Madagascar. The park is home to 200 animals in 70 terrariums, including a turtle with a snake-like neck, a turtle with crocodile-like skin and axolotls – a neotenic salamander that can regenerate many of its organs, including its brain.

Axolotls are the new hope for scientists researching how to cure cancer as well as diseases related to the nervous system and heart. When they are observed in their habitat, the animals look like fish with hands and feet, which arouses the visitors' interest. Among all the animals, the poison dart frog – considered the most dangerous land animal, even though it is only 2.5 centimeters tall, gila monster, cane toad, Chinese water dragon, collared dragon lizard, varanus griseus, 5-meter-long pythons and anacondas, beaded lizard, albino cobra snake and the world's biggest tarantulas, which eat scorpions, and birds draw the most attention from visitors. Wild Park officials announced that the park attracts German and Iranian tourists the most.