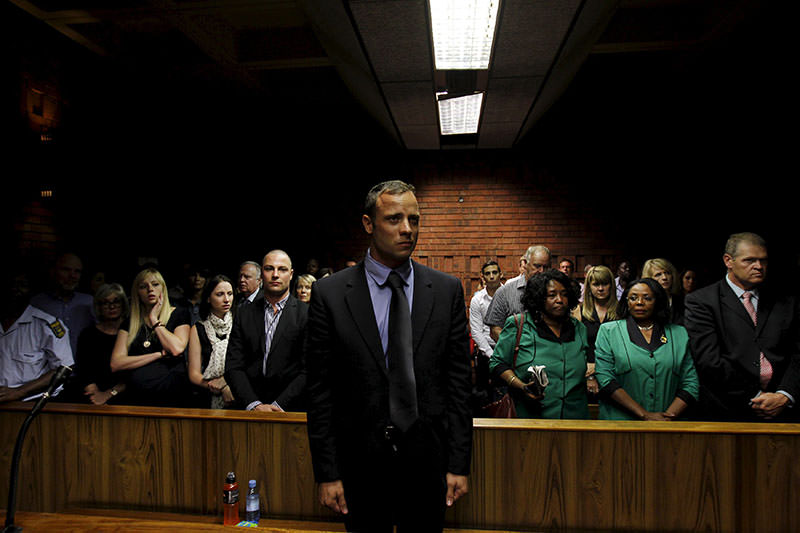 ,Blade Runner, Oscar Pistorius awaits the start of court proceedings in the Pretoria Magistrates court in this February 19, 2013 file photo (Reuters).
by German Press Agency - DPA
Oct 05, 2015 12:00 am
A South African parole board on Monday set aside a decision to release Oscar Pistorius from the jail where he is serving a five year sentence for shooting dead his girlfriend, the prison's department said.

The initial decision to grant parole to the athlete from Kgosi Mampuru II prison in Pretoria was made prematurely, said Manelisi Wolela the spokesman for The Department of Correcional Services.

"The chairperson of the Parole Review Board, Judge Lucy Mailula, concurred with the concerns registered by Justice and Correctional Services Minister Michael Masutha, that the Kgosi Mampuru II CSPB (Correctional Services Parole Board) made the decision prematurely," the statement from Wolela said.

"The Kgosi Mampuru II CSPB is expected to reconvene in due course to take forward and implement the decision of the Parole Review Board."

The Parole Review Board also recommended that Pistorius be subjected to psychotherapy to address "criminogenic factors" of the crime he committed.

"In reviewing the case, the PRB also directed that the profile of offender be referred back to the CSPBs for reconsideration," the statement said.

The athlete, who was sentenced to five years in prison for culpable homicide on October 21 last year, was due to be released in August but the justice minister blocked his parole at the last minute.

Pistorius, known widely as the Blade Runner for his use of running blades, fired four shots at Reeva Steenkamp, 29, through a locked toilet door at his home in Pretoria in the early hours of Valentine's Day 2013. She died at the scene.

Pistorius claimed he thought she was a burglar and was found guilty of manslaughter by a high court in Pretoria.

Steenkamp's parents believe the athlete shot their daughter while he was in a rage and has asked the jail's parole board not to release him.

South Africa's Supreme Court of Appeals is due to decide on November 3 on whether the verdict against Pistorius should be changed to one of murder.

If the court does change the verdict to murder, Pistorius is likely to face a harsher sentence.
Last Update: Oct 05, 2015 9:49 pm