A refugee camp opens its doors to peace and freedom 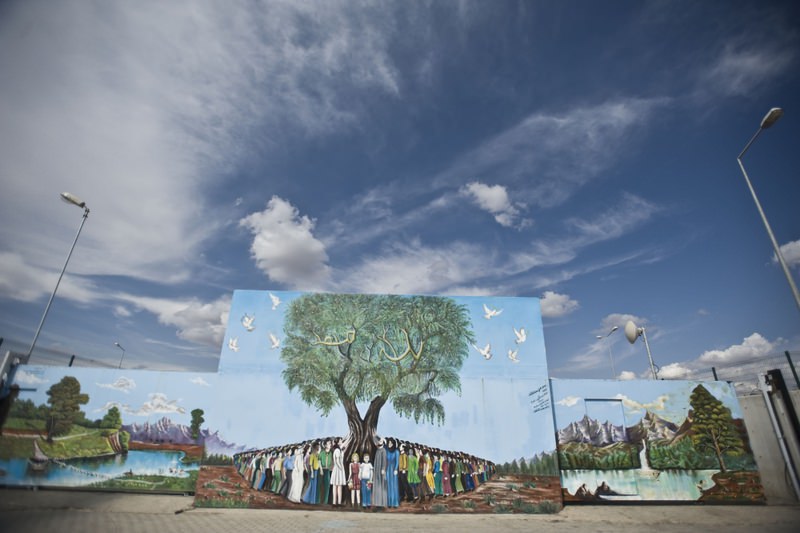 Two Syrian painters have painted symbols of freedom, peace and brotherhood, which they have been yearning for years, on the door of the Kilis Elbeyli Container City refugee camp. Elbeyli Container City, which is home to refugees from almost every profession, is now reflecting the hopes and dreams of Syrians through Fedi Selim and Abdulkerim Zerzuri's paintings. After two months of hard work, Selim and Zerzuri completed their work. They portrayed their longing by turning a 70 square-meter metal door into three different canvases.

They used an olive tree, symbolizing peace, as the main element of the painting and the roots of the tree, which represent people from every nationality. By painting white doves flying and nesting on the branches of the tree, the Syrian painters symbolized peace ruling the four corners of the world. The painting, with rivers and green space, also has an olive tree with branches that feature the words "God" and "Muhammad."

Selim told Anadolu Agency (AA) that he has been interested in painting since his youth and has been earning his living by painting for the last 15 years. He explained that he had to flee his country two years ago due to the civil war, and said: "I was very upset for not being able to practice my profession here. However, Zerzuri and I later decided to paint the door of the container city. We told the authorities about our project and the managers of the camp were open to the idea."

Selim said that they immediately began working as soon as they received permission. "We portrayed freedom and brotherhood. We tried to tell people that everybody is equal in the eyes of God and we are powerful when we are together. Now people are coming to the camp and seeing it though our view of the world, which makes us very happy," Selim said.

Also speaking to AA, Zerzuri thanked those who allowed them to paint the door of the camp. He said that every Syrian is yearning for freedom and they tried to focus on this longing in their painting.

Gülhani Ozan Sarı, the Elberyli district governor, said that Selim and Zerzuri's painting on the door of the container city sends a message to the rest of the world.

Saying that they aim to make life more endurable for their guests who are interested in art, Sarı continued: "To tell the truth, we did not expect this painting to turn out this good. Its symbols point out important values. This door was just a metal piece, but now our painters painted a place that is peaceful and safe and where brotherhood rules."

Sarı said that the big olive tree on the wall represents Turkey. Sarı said that there is a false perception around the world that depicts Islam as a source of violence and havoc. "This painting is a reaction to Islamophobia in a way because people are taking shelter under a tree that bears the names of God and Muhammad. In other words, this tree is the symbol of the mission of our faith. Moreover, the painting also displays that Islam symbolizes brotherhood, togetherness and peace," Sarı said.
RELATED TOPICS