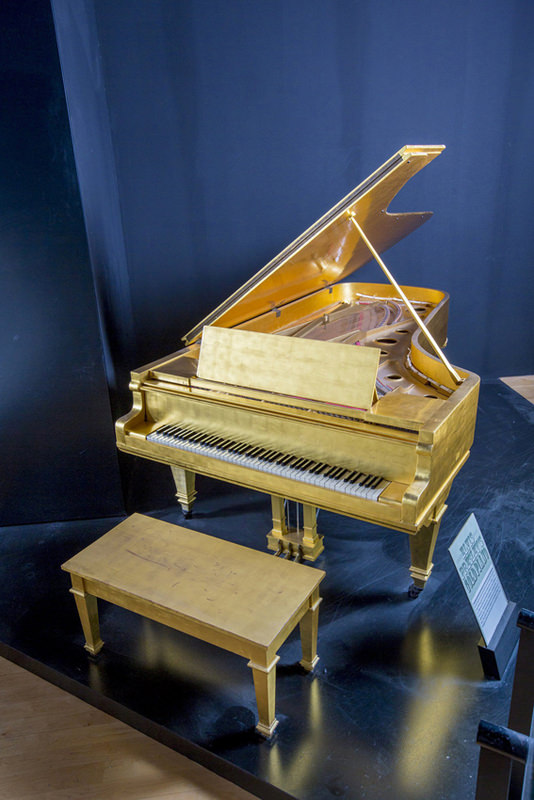 by reuters
Oct 12, 2015 12:00 am
Elvis Presley's gold-leaf grand piano is expected to fetch more than half a million dollars at a November auction that will also feature a Beatles logo drum skin used by the British group in their first performances in the United States. Julien's Auctions said on Monday that Presley played the piano at his Graceland mansion. He bought it in 1955 as a gift for his mother. After she died, Presley's wife Priscilla decided to adorn its original walnut finish with 24 karat gold-leaf as a gift for the couple's first wedding anniversary in 1968.

The piano has been on display at the Country Music Hall of Fame in Nashville for years. Julien's estimates it will fetch between $500,000 - $700,000 at the Nov. 7 auction. It is being sold by a man who obtained it years ago from Graceland and wishes to remain anonymous.

The auction house has put no estimate on the skin from the drum kit played by Ringo Starr when The Beatles performed live on "The Ed Sullivan Show" in New York in 1964 for some 73 million TV viewers.

The drum head also was used for The Beatles 1964 concerts in Washington D.C. and New York's Carnegie Hall. It then passed onto the late Beatles manager, Mal Evans, before making its way to a private collector. A spokeswoman said the drum skin, which bears The Beatles signature logo with a dropped "T," was so unique that it was difficult to put a price on it. Only the skin is up for auction, not the entire drum. Elvis and Beatles memorabilia is among the most sought after by rock music collectors but prices don't compare to those paid for movie stars like Marilyn Monroe, whose iconic white "subway dress" from the 1955 movie "The Seven year Itch" sold for $4.6 million in 2011.