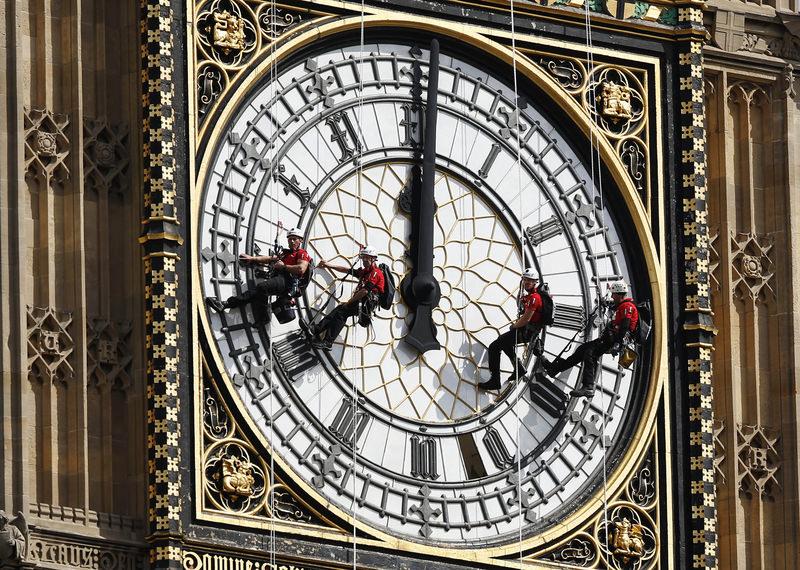 by reuters
Oct 20, 2015 12:00 am
London's 156-year-old Big Ben clock - which has already shown signs of its age this year by chiming late - may now need major repairs that could leave one of the British capital's major landmarks silent and covered in scaffolding for months to come. The five ton clock, including its four meter (12-foot) long minute hand, needs extensive work to fix water erosion and cracks in the masonry, a survey by a parliamentary committee found. Over 31 years have passed since similar works were last carried out.

A long period without its familiar hourly chimes would be the first since 1976 when it stopped tolling intermittently for 26 days over nine months. "Committees of both Houses are currently considering the study and will provide advice to inform the business case for how best to proceed," a parliamentary spokeswoman said. "No decisions on works, timescales or costs have been agreed," she added in a statement. A parliamentary source told the Sunday Times newspaper the refit could cost up to 40 million pounds ($60 million) and last three years. The clock is in such a dilapidated state that it is "ready to fail," the source said. In August, the bell started to chime up to six seconds late every hour, prompting a thorough check of the clock's pendulum and gears.

Big Ben's woes match those of the Houses of Parliament, which adjoin the tower and are themselves in need of restoration work that could cost as much as 5.7 billion pounds and take 32 years, according to a report published in June.