Cappadocia's balloons safer than ever 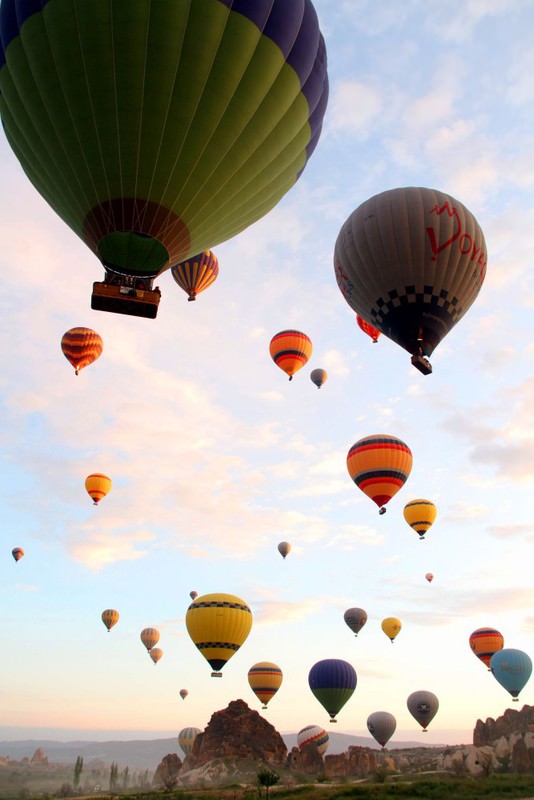 Hot air balloons, the jewels of the Cappadocian sky, provide hundreds of people with one of the world's greatest views every day. The first balloon hospital in Turkey now ensures that flying in a hot air balloon over Cappadocia is safer than ever

The famous Cappadocia landscape, located in the center of Anatolian, is the result of eroding rain and winds over thousands of years following volcano eruptions that took place 2 million years ago. Hot air balloon tours in Turkey's Cappadocia region, best known for its unusual rock formations or fairy chimneys, continue even into the winter months due to the continuing high demand, with the balloons decorating the blue sky through December and into the new year. The region is a popular holiday destination thanks to its main attractions such as the Göreme Open Air Museum, the ruins of Zelve and Paşabağı and the underground cities of Kaymaklı and Derinkuyu, along with the areas of Avanos and Ürgüp. Every year the area attracts almost 2.5 million tourists. Floating over Cappadocia while the rising sun illuminates the landscape provides a memorable sight like no other in the world. To ensure that the winter's adverse weather conditions don't compromise the safety of the balloons, Turkey's first "balloon hospital" was founded in Cappadocia four months ago. The balloons in Cappadocia, one of the leading hot air balloon stations in the world with 300 daily takeoffs, have been renewed and maintained at the Cappadocia Balloon Maintenance Facility.

Speaking to Anadolu Agency, the operating manager of the facility, Nejat Öksüz, said the maintenance facility was established after a 30-month period as part of the Small and Medium Industry Development Organization's (KOSGEB) Coalition Support Program on the instructions of the civil aviation authorities. He added that the facility is a first in Turkey and will help maintain the safety of hot air balloons that tour in places like Cappadocia and Pamukkale, which is famous for its hot springs and travertine. The facility employs 19 professionals who are experts in the maintenance of hot air balloons. Operating throughout the year, the facility works like a hospital. The facility offers services for maintenance and repair and records all the details about the balloon. Highlighting that the balloon maintenance facility was much needed in such a heavily populated tourist spot, Öksüz said all documents concerning the hot air balloons will be archived in Cappadocia. According to Öksüz, the facility ensures that secure repaired balloons fly their passengers in the best possible safety while prolonging the lives of the balloons.

Each balloon has to be taken for a maintenance check after 100 hours of flying or periodically three times a year as the regulation suggests. Sometimes balloons are damaged due to a rough landing or a technical malfunction that requires immediate action. Apart from these, the balloons might suffer technical failures in their domes, basket or fuel tanks due to overuse. When these failures occur, the companies that own these balloons go to the facility with a provisional diagnosis and the facility repairs the balloons within a day.

Öksüz said these routine checks help them gain the trust of tourists as well as secure Cappadocia's touristic position in the international arena. "We can say that our facility has eliminated 90 percent of the security concerns about the hot air balloons operating in the Cappadocia region," said Öksüz. "Tourism agencies that bring international tourists to Turkey have also expressed their satisfaction over the facility as they know that everything about the security of the balloons is now under control. Moreover, people trust us because we undertake the maintenance work under the supervision of the civil aviation authority. We can say that the credibility of the balloons has skyrocketed."