Back to the future writer: US' Donald Trump was inspiration for villain Biff 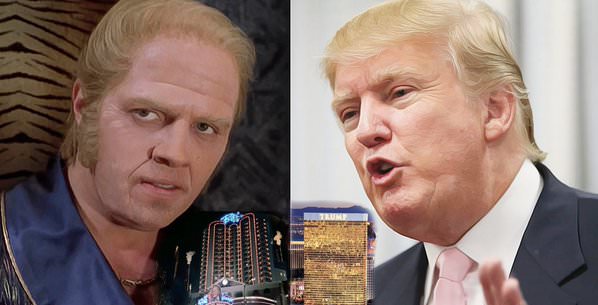 Twitter photo by @TheAntiMedia1
by French Press Agency - AFP Oct 22, 2015 12:00 am
In yet another present day "Back to the Future" tie-in, it turns out Republican presidential hopeful Donald Trump was the inspiration for Biff Tannen, the flic's bullying villain.

"We thought about it when we made the movie! Are you kidding?" "Back to the Future" screenwriter Bob Gale told online news outlet "The Daily Beast."

In "Back to the Future Part II," Tannen -- hero Marty McFly's arch nemesis -- reappears as the owner of a 27-story casino who takes over fictiona Hill Valley, California.

"You watch 'Part II' again and there's a scene where Marty confronts Biff in his office and there's a huge portrait of Biff on the wall behind Biff, and there's one moment where Biff kind of stands up and he takes exactly the same pose as the portrait? Yeah," said Gale.

Tannen's towering casino bears a striking resemblance to the Trump Plaza Hotel in Atlantic City, completed five years before the film's release in 1989.

"Yeah," Gale told the Daily Beast when asked about the resemblance. "That's what we were thinking about."

The movie has occasioned an outpouring of nostalgia marking the real-life collision with the day in the future that McFly and professor Doc Brown fly to in their Delorean time machine -- October 21, 2015.

A ream of celebrations and news stories have highlighted the movie's futuristic hits and misses -- drone dog walkers, hoverboards and self-lacing sneakers.