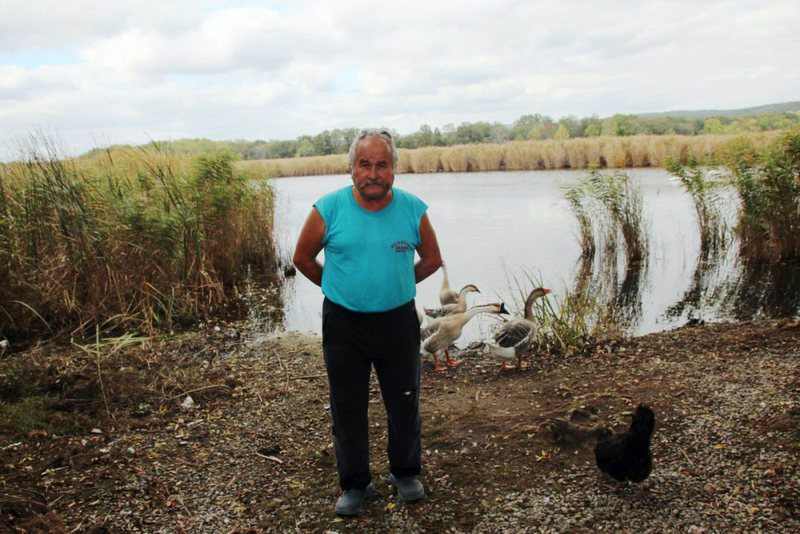 by Ihlas News Agency Oct 22, 2015 12:00 am
Mehmet Özğüner, 67, has been living in a cottage in İğneada Longoz Forest all by himself for the last eight years.

He moved to Kırklareli's Demirköy district in 2007 and soon after decided to build a cottage and live deep in the forest. Özğüner, who said he does not like living in the city and wants to get away from the toxic fumes, now feeds animals, reads books and grows vegetables in the garden of his cottage. He eats the vegetables that he grows and meets his needs, such as electricity and water, from nature itself. He said that he was very ill when he first arrived in İğneada; however, he has since not felt any substantial pain "for a long time." Speaking to İhlas News Agency, Özğüner simply said, "I got away from the city life and I found heaven."

He once again underscored his dislike for city life and living among crowds and said he found peace in the forests of İğneada. "I have been living here since 2007 and I have not been in Istanbul for seven years. I was able to be freed from the exhaust fumes and I am living in heaven," said Özğüner.

Özğüner moved to Istanbul in 1964 to earn his living. After moving to the big city, he married and had two kids. When his children finished university and started working as engineers, Özğüner decided to live on his own. "I got rid of the toxic environment when I moved here. The eggs of my chickens and the vegetables I grow in my garden are more than enough for me. I produce electricity from solar panels. The air is clean and beautiful. When I came here, the aching in my foot was killing me, but now, I am cured. I do everything on my own. I eat organic tomatoes, peppers and eggplants from my garden. I spend my time reading books and newspapers, feeding animals, chopping wood and growing vegetables," said Özğüner.
Last Update: Oct 22, 2015 10:28 pm
RELATED TOPICS