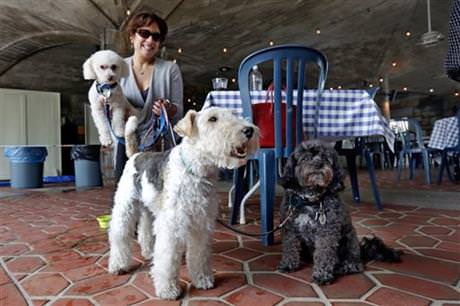 The measure was signed into law late Monday by Gov. Andrew Cuomo. States including California, Florida and Maryland already have similar laws.

Dog lovers and many restaurant owners in New York support the idea, noting that the animals would have to be leashed and that restaurants could choose not to allow canines in outdoor eating areas.

"This action will give restaurants an additional option to boost revenue and grow their businesses by appealing to this new audience of dog-owning New Yorkers and their four-legged friends," Cuomo said. "By allowing this additional flexibility and by establishing firm health and sanitary guidelines, this legislation strikes a right balance."

Dog owners say they're delighted with the new law.

"I think this speaks volumes to where we are as a society and how most people with dogs view them as members of the family," said Kim Wolf, a New York City dog own who works for an organization that helps dog owners in poor neighborhoods care for their animals.

She expects owners will handle their dogs responsibly while dining, and problems will be few.

But health officials have opposed allowing canines in outdoor cafes, citing concerns about biting and sanitation.

While the legislation was being debated this spring, the New York State Association of County Health Officials said it was "deeply concerned that this bill will bring additional public health risks into food service establishments where none need exist." The organization didn't immediately return a call Tuesday about its approach now that the measure is law.

As a Manhattan dog owner, Evelien Kong is enthusiastic about doggie dining, but she understands those who aren't.

"Maybe there's a happy medium," such as having dog-friendly and dog-free sections of restaurant patios, Kong said Monday night while walking her 8-year-old shih tzu, Gracie. Dog owners need to take responsibility for making sure their pets aren't pests to fellow diners, and "there has to be a healthy, mutual respect for both sides," Kong said.

Legislation intended to help New York's felines didn't fare so well. Cuomo vetoed a proposal to fund organizations that trap and neuter feral cats and then release them back into the wild.

In his veto, the Democratic governor noted that another law already makes it a misdemeanor to release wild cats into the environment. He also noted that feral felines pose a significant threat to local wildlife such as birds.

"Although the goal of this bill is laudable, it is problematic for several reasons," Cuomo said.

As for Cuomo, he has neither. But his girlfriend, chef Sandra Lee, has two cockatoos.
Last Update: Oct 27, 2015 8:15 pm
RELATED TOPICS