World Indigenous Games get off to colorful, but rocky, start 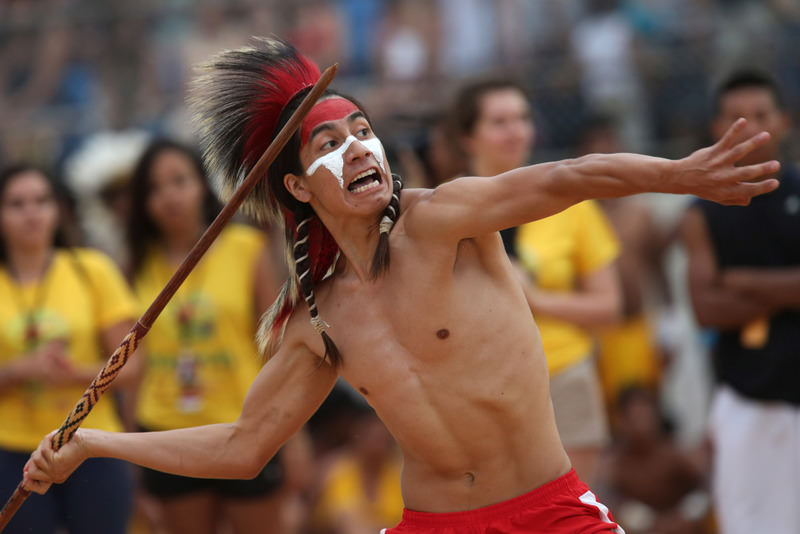 by Associated Press
Oct 27, 2015 12:00 am
The first World Indigenous Games got off to a rocky start Friday as the opening ceremony's colorful parade of native peoples was marred by technical hitches and a noisy protest against the Brazilian government. Billed as indigenous peoples' answer to the Olympics, the nine-day event has drawn around 2,000 native people from dozens of Brazilian tribes and nearly 20 countries to Palmas, a steamy agricultural outpost in central Brazil. The opening ceremony was a rich, theatrical affair.

Orchestrated by a producer who is helping plan the opening ceremony for next year's Olympic Games in Rio de Janeiro, the event included a parade of people in native dress ranging from tropical-friendly straw skirts and feathers to Artic furs. Embattled Brazilian President Dilma Rousseff was on hand for the ceremony, and although she didn't address the crowd, she was initially greeted by boos and hisses. When a traffic jam kept busloads of participants from reaching the venue, sparking a long and uncomfortable mid-ceremony delay, several groups of indigenous spectators unfurled protest banners and broke into anti-government chants. "Dilma's not good for Brazil and she's not good for us," said Jose Cicero da Silva, a farmer from the Wassu Cocal nation from Brazil's impoverished Alagoas state. "For a supposedly leftist government, she has done nothing to help the indigenous cause." Rousseff, who has seen her popularity ratings plummet to single digits amid a tanking economy and unfurling corruption scandal at state-run oil giant Petrobras, has long had frosty relations with Brazil's indigenous communities.

They regard her as too friendly with big agriculture and slow to designate indigenous territories. A proposal to amend the constitution to put the power to designate indigenous lands in the hands of Congress, which is heavily influenced by agricultural interests, has outraged many here. "Brazilian politicians are increasingly against indigenous peoples," said Jaira da Silva of the Tingui-Boto people. "There's a super conservative congress that's trying to take away indigenous rights that are enshrined in the very constitution."

Still, for many in the audience, the event transcended politics. Many spectators and participants alike were moved to tears by the ceremony, which featured indigenous people from as far afield as the Philippines, New Zealand and Russia. The latter's single delegate defied the tropical heat in a bespangled black cat suit with fur accents. "I'm at a loss for words," said Reinaldo Quispe, an Aymara ındian in the Bolivian delegation. "I never in my life thought I would meet my brothers from the different tribes around the world." A human kaleidoscope concluded the ceremony as the nearly 2,000 delegates melted into a throbbing, dancing and chanting mass of multi-colored humanity. Although the ceremony had dragged on for hours, the delegates were slow to disperse. The World Indigenous Games, which includes such events as canoeing, archery and tug-of-war, runs through Nov. 1.