Shoeshine parlors endeavor to adapt to the changing world 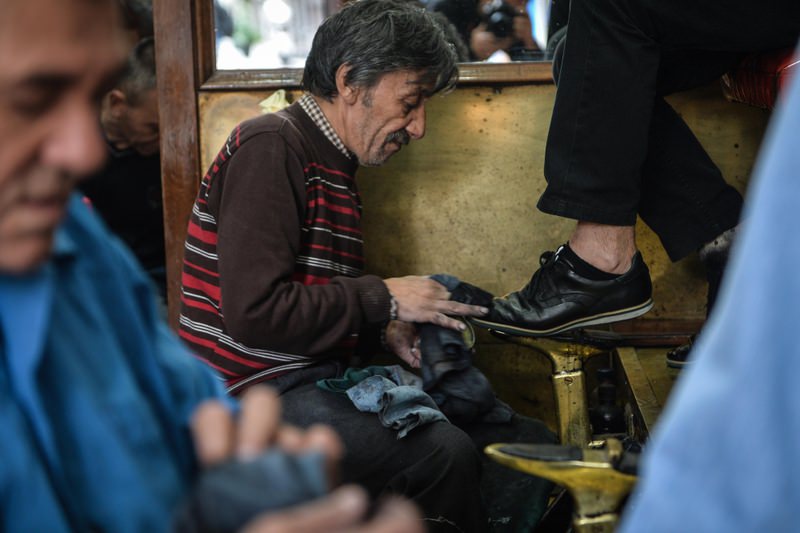 Ancient cities stand out with their centuries-old traditions. Shoeshine parlors are Istanbul landmarks, which have witnessed the changes in the city over the centuries. Although they are trying to adapt to the 21st century, with the lack of young people interested in being trained in the profession, the future for shoeshine parlors seems bleak

The historical shoeshine parlors in Beyoğlu and Şişli have been repairing and shining shoes for half a century while passing down Istanbul's values, culture and collective memory to the next generation. The last representatives of shoe shining in Istanbul are trying to keep their business going despite the changing times and modern technology.

Seher Örenler, the manager of a shoeshine parlor in Beyoğlu that has been operating since 1951, took over the business after the death of her father, a rarity for the male-dominated profession. Speaking to Anadolu Agency (AA), Örenler said shoeshine parlors used to be one of the most important places to socialize, hence this business is a culture that should be protected. "Young generations do not even know what shoeshine means. This is a very upsetting thing. Tourists, especially young people, know about us and visit here; however, our own people do not have a clue," Örenler said. She said they have a hard time finding young people to train and pass the profession to. Örenler, whose primary mission is to transfer the profession that she inherited from her father to the future generations, also said people from certain social and cultural backgrounds appreciate the shoeshine profession the most.

As she talked about the past, she also said her father polished the shoes of Mustafa Kemal Atatürk, the founder of the Republic of Turkey, at Sirkeci Train Station. She added that Prime Minister Ahmet Davutoğlu brings his shoes to their parlor, their most recent visit being a month ago.

Örenler said she is busier around the fall. They have less work in the summer since people prefer to wear comfortable shoes. According to Örenler, people pay too much money on shoes. "Companies and well-known brands sell shoes at incredible prices. When there is a problem with the shoes two months after the purchase, companies refuse to take them back, saying it is the customer's fault. As a shoe shiner, this situation makes me sad."One of Örenler's customers, Lokman Öztürk, said shoeshine parlors have an authentic and mystical odor. "I grew up in Kadırga. It is hard to feel the same atmosphere somewhere else. Even if my shoes are polished when I get here, I have them polished once more. I like the sincere attitude of the workers here," Öztürk said. Commenting on his observations about the shoeshine parlors, Öztürk said people from every segment of society pay a visit to the parlor. "I find the chance to get to know different kinds of people. Shoeshine parlors are social laboratories," he added.

Hüseyin Dağlı has been working at the Örenler's shoeshine parlor for 33 years. He said many known figures from the Turkish art and culture circle come to the parlor to have their shoes polished, and added that he has been gladly serving them for years. İsmail Gökçay, another employee of the parlor, said he is very happy about this profession. "I have been a shoe shiner for 52 years. I brought up my children by practicing my profession. Those who intern here look down on the shoeshine business. They also think it is hard. Actually, they can learn it easily if they are willing," Gökçay said.

Ender Elitez, the manager of a shoeshine parlor in Pangaltı, Şişli, is the third generation to manage the parlor that his grandfather opened. He said each of their customers is very valuable for them. "Shoe shining is a culture. My grandfather opened his first shop in a very old building in 1928. We were operating in the same building for 85 years but they evicted us. Our customers reacted strongly to this change," Elitez said. He stressed that the habit of visiting a shoeshine parlor is no longer common, adding he and his colleagues see themselves as the last representatives of a dying cultural value.