Sexism at its finest: Russia’s all-female astronaut crew asked how they would cope without men and make-up 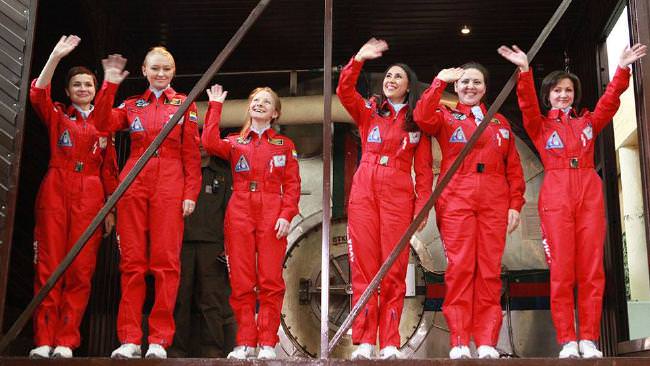 Six female Russian astronauts wave before boarding a capsule for an experiment conducted at Moscowu2019s Institute of Biomedical Problems, Oct 28, 2015. (Facebook Photo)
by Daily Sabah with AFP
Nov 03, 2015 12:00 am
A team of six female elite astronauts climbed aboard a mock spacecraft on October 28 as part of a test run for Russia's first ever all-female mission to the moon in 2029. However, before the all-female crew embarked on their mission they had to face some "earthling sexism".

Despite that the mission is seen as a giant step for gender equality, these six women, all of whom are experts in fields such as biophysics, psychology and medicine, were asked how they would "cope" without men, showers and make-up for eight days and were wished "a lack of conflicts", in the pre-test press conference.

The tone of the conference was set early on with casually sexist comments wondering how women would interact in such conditions.

"Such a crew is taking part for the first time in a simulation experiment. It's interesting for us to see what is special about the way a female crew communicates," said Sergei Ponomaryov, the experiment's supervisor.

"It will be particularly interesting in terms of psychology," said the institute's director Igor Ushakov.

"I'd like to wish you a lack of conflicts, even though they say that in one kitchen, two housewives find it hard to live together," he added.

Darya Komissarova, a member of the trained-crew parried the comments gracefully: "We are very beautiful without makeup."

Her colleague Anna Kussmaul was more direct: "We are doing work. When you're doing your work, you don't think about men and women."

Team leader Yelena Luchnitskaya said she expected the women to deal with any conflict.

"I'm sure we all have the education, personal qualities and the upbringing, at the end of the day," she said.

"So far I can't imagine what would rattle us," she stressed.
Later, the crew was also asked about their hair, 'clearly' the most important part of the experiment. "I don't know how we'll survive without shampoo. Because even in this situation, we really want to stay looking pretty," Kussmaul replied sarcastically.


The six women, aged 22 to 34, are expected to perform 30 scientific experiments during the eight-day simulation and will live inside a wood-panelled suite of rooms at Moscow's Institute of Biomedical Problems as part of a study on the effects of living in space on human physiology and emotions.

Their eight-day mission will be completed Thursday, November 5.

Russia sent the first woman into space, Valentina Tereshkova, in 1963 but has lagged behind since. Last year it sent its fourth female cosmonaut into space, Yelena Serova.

Serova complained of a flurry of media interest in how she would wash her hair aboard the International Space Station, pointing out that male cosmonauts did not face the same line of questioning.

Ponomaryov called the latest experiment an effort to make up for lost time.

"There's never been an all-female crew on the ISS. We consider the future of space belongs equally to men and women and unfortunately we need to catch up a bit after a period when unfortunately there haven't been too many women in space."