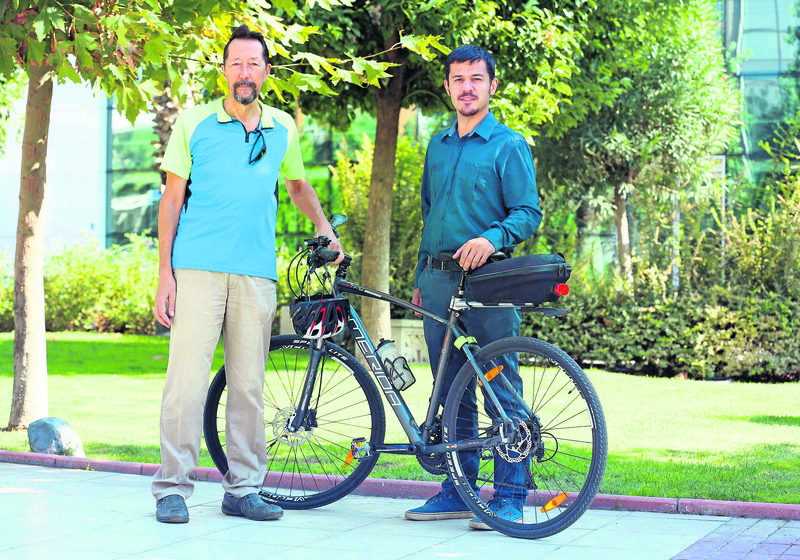 by Nov 03, 2015 12:00 am
Two academics in Turkey's Aegean province of İzmir have developed a project to stop the theft of bicycles on streets with a special locking mechanism that can replace traditional bike locks. The smart-lock will allow bikers unique access to their bikes, while the mechanism will give information on its location.

The project of the two academics, who made biking a lifestyle, won funding worth TL 75,000 ($26,775) from the Ministry of Science, Industry and Technology in Turkey. Oğuz Gora, founder of the project and Graeme Hanssen, project associate, both professors in Yaşar University, said they developed the system to prevent theft and resolve flaws in legal procedures that confront owners wishing to get their bikes back.

The "Bike Inactivating System" differs from traditional chain and cable locks , uses parts on the wheels that are irremovable by human force. Only the owner or user can activate the system. A sensor on an electric card is attached to the mechanism, hardly noticed by people, also conveys information on the location of the bike, in case of thefts. The mechanism is expected to weigh less than 500 grams, offering users easy portability, says Hanssen, who decided to take part in the project particularly after his two bikes were stolen. "Every year across the globe, some 200 million bikes are sold, and in Turkey it is 1.3 million. However, measures fail to prevent a significant problem bikers face all around the world: Bicycle theft. Also, locks do not have a preventive or dissuasive effect on thieves. That is why we created this mechanism," said Oğuz Gora. The inactivating system will be produced solely in Turkey and then exported to other countries, he added.
RELATED TOPICS