Swedes place 1st in English skills ranking, Turkey has a long way ahead to catch up

The EFI's index for European countries.
by daily sabah
Nov 04, 2015 12:00 am
Swedes have excellent English skills, and once again a unique study by the educational company EF proves it. The country ranked the first of 70 countries in the fifth EF Education First (EF) English Proficiency Index (EPI), whereas Libya ranked last, according to figures released on Tuesday. Turkey, on the other hand placed 50th in the list, with the country's level of proficiency corresponding to "very low."

This fifth edition of the EF English Proficiency Index (EF EPI) ranks 70 countries and territories based on test data from more than 910,000 adults who took the online English tests in 2014. Turkey had ranked 43rd out of 44 countries in the first edition of the test back in 2011, with again the level of proficiency corresponding to "very low". 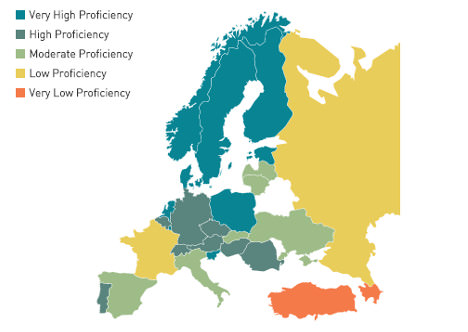 The study did not include all of the European countries. The area in white provided on the map on the left are countries that did not take part in the study.

The index found that Europe continues to dominate the numbers, filling the highest proficiency bands. Northern and Central Europe are particularly strong, and their positions have strengthened over the past five years. France stands out in Europe for its low English proficiency.

The index also found that women in Turkey scored slightly higher than men with 48.10 versus 50.09 points, along with the global trend. In nearly all countries surveyed, women had stronger English skills than men.
Last Update: Nov 04, 2015 4:01 pm