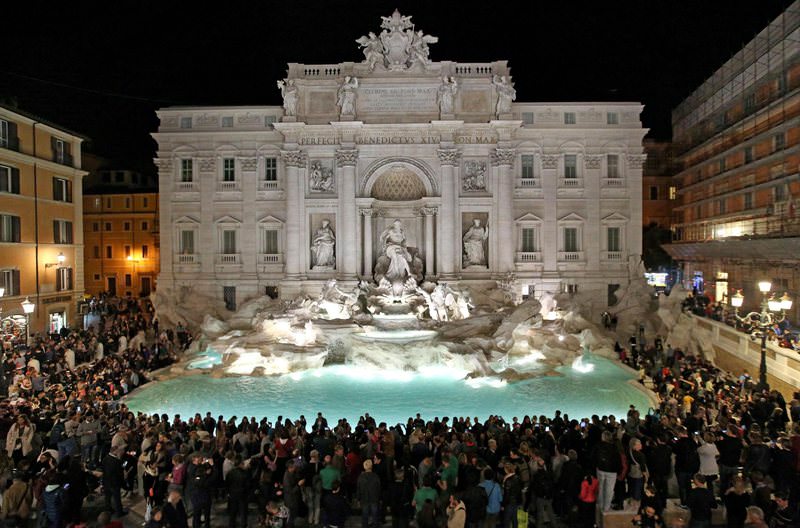 by reuters
Nov 05, 2015 12:00 am
Water coursed back into Rome's Trevi Fountain for the first time in over a year on Tuesday as the city showed off the latest privately-funded restoration of its prized landmarks.

The stone rendering of Tritons guiding the shell chariot of water god Oceanus glowed with new high-tech lighting after the most drastic clean-up in its more than 250-year history.

Marking the end of an aqueduct said to have carried "Virgin Water" to ancient Rome, the fountain now boasts fresh pumps and a pigeon deterrent system following a 2.2 million-euro ($2.4 million) facelift.

The work, sponsored by fashion house Fendi, began in 2014, some 25 years after the last major restoration, amid concern over stone laurel leaves tumbling from the facade.

"We heard two years ago just by chance that the fountain was losing pieces and we immediately called the Rome government," Fendi Chief Executive Pietro Beccari said.

Transparent barriers around the basin and a footbridge that had allowed visitors to observe restorers at work were removed, returning the scene of screen siren Anita Ekberg's late night dip in the 1960 film La Dolce Vita to its former glory.

Tourists in the piazza, named after the three roads ("tre vie") that once met there, waited to throw a coin into the newly-crystalline water in homage to the tradition that doing so guarantees the thrower a return trip to the Italian capital.

"It's in the movies and it's beautiful, especially now that it's been all cleaned," said Hannah Cowley, 33, a nurse on her honeymoon from Australia.

Known for its luxurious furs and Baguette handbags, Fendi is one of many private firms that have poured money into monuments across the country as a three-year recession hit state coffers.

The company has also paid to restore Rome's "Four Fountains" and the Fascist-era "Square Colosseum".

Culture Minister Dario Franceschini has called for more public and private investment in Italy's heritage, and introduced tax cuts of up to 65 percent for these donations.

Elsewhere in the Eternal City, luxury shoemaker Tod's is completing a restoration of the Colosseum, jeweler Bulgari is overhauling the Spanish Steps and Russian tycoon Alisher Usmanov has pledged to restore an ancient basilica in Rome's forum.