Drones fly out of barracks and into our homes 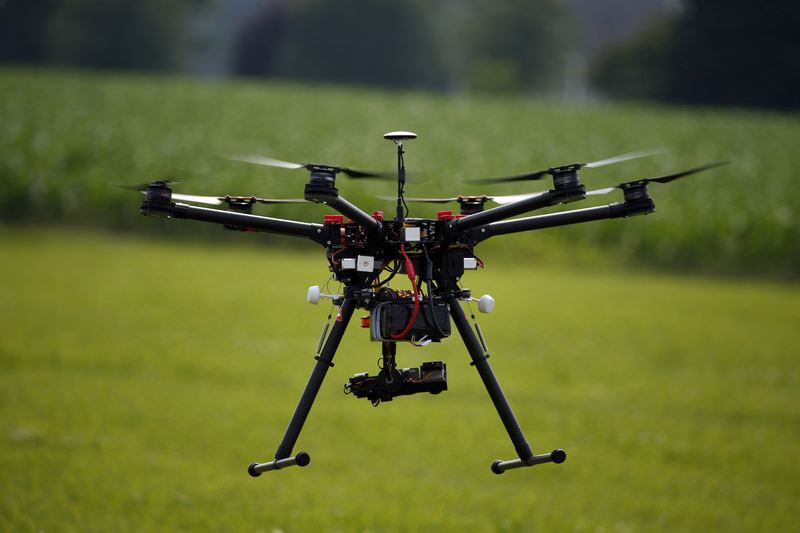 Unmanned aerial vehicles (UAV), also known as drones, are increasingly used in different fields outside military purposes, but their unconscious use poses great risk. DronAkademi in Istanbul teaches drone hobbyists how to enjoy them safely

As Engün Yurdakul, 32, a textile supplier, proposed to his girlfriend at an Istanbul beach, a small, eight-wing drone hovering overhead descended to deliver the all-important engagement ring.

This episode, recounted in the Turkish media, underscores the banality of the presence of drones in everyday life, or for special occasions such as a marriage proposal. Indeed, unmanned aerial vehicles (UAV), generally known for their use in military operations, have increasingly integrated daily life activities.

But this new popularity also comes with a warning: Drones can be dangerous if not used properly. That is why Cenk Uysal and Barış Girgin founded the DronAkademi (DronAcademy) in Istanbul, where they teach drone hobbyists how to enjoy them safely.

"Although there are no official regulations on drone use in Turkey, we think that drones need to be used properly for safety's sake," Uysal told Anadolu Agency. The school, established in March 2015 in Istanbul's Üskudar district, trains its students - of which a little less than half are women - how to deftly maneuver their flying toys.

The academy also provides training on manual drone (three hours), which costs TL 130 (roughly $40), and basic drone training (two hours), priced at TL 90. "In practical courses, we are teaching how to fly drones by offering dual flights in open places in Istanbul," Girgin said. In dual flights, both the student and the teacher hold a remote control drone.

The young entrepreneurs believe drones will soon be used in a variety of fields including shipping, agriculture and area analysis. Numerous reports estimate that by the end of the decade the global commercial drone market will be worth more than $1 billion. Meanwhile, HaberTürk reported on July 7, Turkey was the sixth country worldwide to import drones with a 6.2 percent world market share. According to Girgin, prices of drones varied between TL 3,000 and TL 30,000.

Terziöz, working in the marketing department of Helisis Elektronik, a drone manufacturer in Istanbul, underlined that the company's customers include film and documentary makers, the state-run Turkish Radio Television (TRT) and Turkey's Disaster and Emergency Management Authority (AFAD), which told Anadolu Agency it uses them for search and rescue operations.

Terziöz said he himself uses drones as well. "I use them for imaging," he said. As drones are becoming increasingly popular, the easy access to their purchase has brought the issue of safety to the forefront.

On Jan. 18, Aspet Manukyan, an amateur pilot, shared a 12-minute video clip on YouTube and Facebook, showing a drone flying above Istanbul's Atatürk Airport, the largest in Turkey by passenger numbers. Turkey's General Directorate of State Airports Authority (DHMI) launched an investigation into the matter. Manukyan faced one to six years in prison for risking traffic security. The investigation is still underway. An air traffic controller, speaking to Anadolu Agency on condition of anonymity, said drones could be used without a license or insurance. He said after the footage of the drone was made public on social media, studies on the usage of drones had been launched. He added certain regulations were prepared by Turkey's Directorate General of Civil Aviation (SGHM) but they were not enforced.

It must be noted that in July 2013, the SGHM did impose that flying drones weighing more than 4 kilograms required a pilot license and flight permission.

"No incident has occurred so far but these devices are distracting pilots," said the air traffic controller who is a member of the union, the Air Traffic Controllers Association of Turkey.

The controller said that when a pilot spotted a drone around the airport they notified the air traffic controller who then proceeded to call police and a private security force to prevent an incident. In New York, On Sept. 4, a teacher was arrested for flying a drone in a public park during a tennis match, according to the BBC.

The drone crashed into empty seats at the Louis Armstrong Stadium and no one was injured, it was reported. On Feb. 26, 2015, a drone was spotted flying over the French Presidential Palace in the capital, Paris. Two days earlier, drones had been spotted flying over 17 nuclear power plants in France since October. In the U.S., the Federal Aviation Administration (FAA), the national aviation authority, states on its website that flying drones as a hobby, unlike commercial use, does not require FAA approval. The website does warn users however that they should avoid flying over stadiums, at airshows or sporting events. On Friday, the Wall Street Journal reported that a federal task force was planning to recommend the free registration of all purchased drones in order to bolster accountability.
RELATED TOPICS