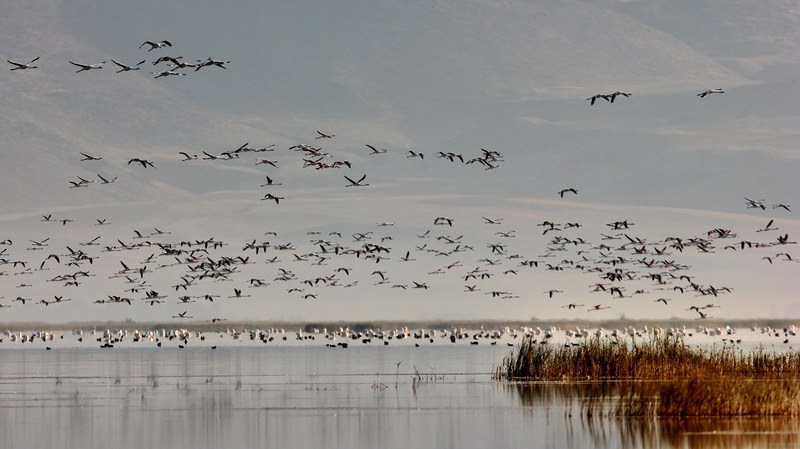 by Anadolu Agency
Nov 11, 2015 12:00 am
Harboring migratory birds, Sultansazlığı National Park in central Kayseri province has become a haven for birds again after the water levels returned to normal following the use of a modern irrigation system. Lying between the city's Yahyalı and Yeşilhisar districts, the national park now houses migratory birds for the entire year.

Declared a national park in 2006, yet drying out in 2009, the national park has returned its glory days with the higher water levels through pressure irrigation system. This year, the park hosts 250 bird species and about 30 flamingos.

Murat Akgün, the head of the Provincial Directorate of Forestry and Water Affairs, said the water was brought through the Zamantı Tunnel and the number of bird species has increased since then. "The national park has almost returned to its old days. Not only bird population but the entire plantation revived," Akgün said.

Sultansazlığı National Park has a strategic significance and is protected under the Ramsar Convention, an international treaty for the conversation of wetlands. Stressing that migratory birds decide their migration routes according to the location of wetlands, Akgün said flamingos changed their route when the reed field was drying out. "Now, 30 flamingos are coming here. I think their number will increase. The national park will be the place where visitors can see the highest number of flamingos soon," he continued.

The irrigation project also eliminates the lack of water for agricultural purposes, Akgün said. Farmer locals benefit from the project. A pressure irrigation system was established for an area of over 4,000 decares, allowing 289 households to effectively use the agricultural areas. Akgün said prior to this system, another method was implemented, yet it turned the reed field into an unfertile and dry place. "Agricultural productivity increased in the area. Locals are also more conscious toward national parks," he said. Ziya Aşık, the president of a local irrigation cooperative, said only animals were grazing in the area previously. "Through a modern irrigation system, we are planning to grow corn, potato, sugar beet and clover. There is a 50 percent increase in our harvest amount. We used to bring water through canals, which harmed the soil and reduced output. This system allows us to use water as we wish. It is now possible to irrigate the agricultural areas all year round," he concluded.