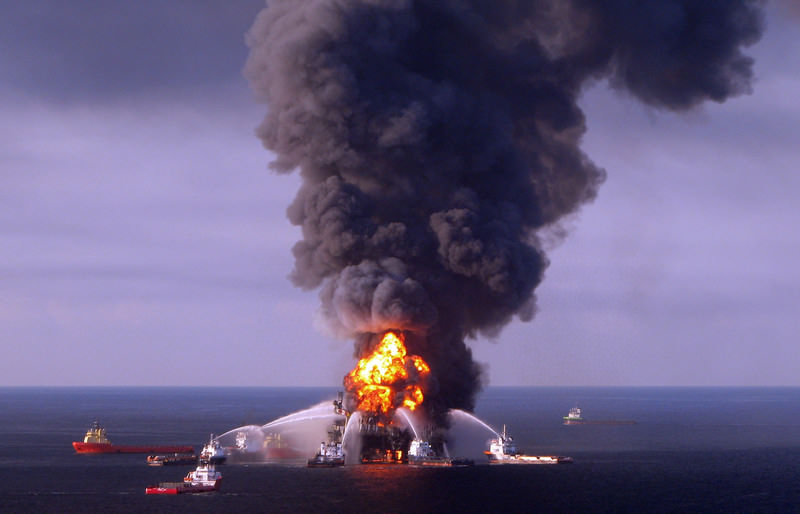 A file picture released by the US Coast Guard on 22 April 2010 shows a fire aboard the mobile offshore oil drilling unit Deepwater Horizon. (AFP Photo)
by Associated Press
Nov 12, 2015 12:00 am
The chemical sprayed on the 2010 BP oil spill may not have helped crucial petroleum-munching microbes get rid of the slick, a new study suggests.

And that leads to more questions about where much of the Deepwater Horizon oil spill went. If the new results are true, up to half the oil can't be accounted for, said the author of a new study on the spill in the Gulf of Mexico.

After the 172 million gallon spill, the chemical dispersant Corexit 9500 was applied by airplane on the slick to help it go away and help natural microbes in the water eat the oil faster. The oil appeared to dissipate, but scientists and government officials didn't really monitor the microbes and chemicals, said University of Georgia marine scientist Samantha Joye.

So Joye and colleagues recreated the application in a lab, with the dispersant, BP oil and water from the gulf, and found that it didn't help the microbes at all and even hurt one key oil-munching bug, according to a study published Monday in the journal Proceedings of the National Academy of Sciences.

Joye's team chronicled nearly 50,000 species of bacteria in the Gulf and what they did to the water with oil, and water with oil and dispersant.

But when the dispersant was applied, they didn't grow. They stayed around 3 percent, Joye said.

Instead, a different family of bugs called colwellia multiplied more, and they don't do nearly as good a job at munching the oil, Joye said. She theorized that for some reason the dispersant and marinobacters just don't work together.

So if the oil wasn't degraded by the bacteria, the question remains: Where did it go? Joye guesses it might still be on the floor of the gulf.

The National Oceanic and Atmospheric Administration welcomed the study and will evaluate to determine how well dispersants work in the future, said agency spokeswoman Keeley Belva.
Last Update: Nov 12, 2015 6:54 pm