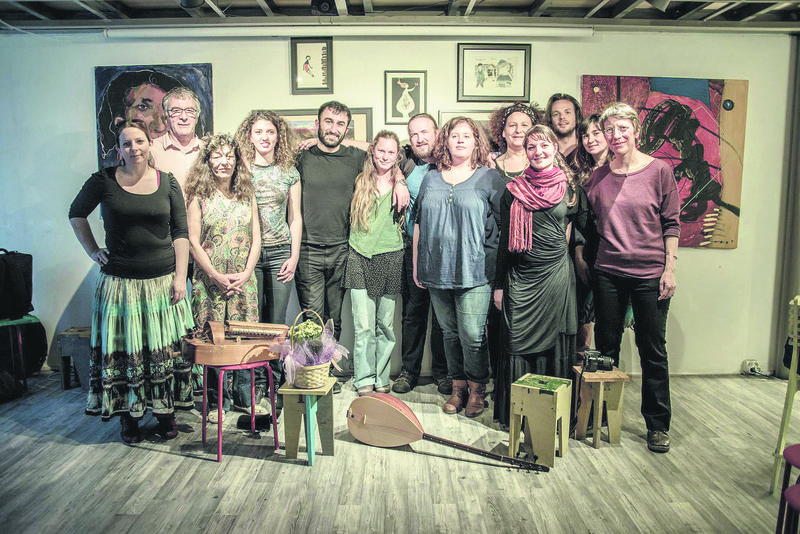 by daily sabah
Nov 19, 2015 12:00 am
Syrian and Turkish artists come together at Arthere Workshop-Cafe art center, which was established by Syrian artists. Artists who fled from their homelands due to the ongoing civil war in Syria meet at the workshop-cafe and continue to produce art. Established by artist Omar Berakdar a year ago, the art center provides a creative atmosphere for Turkish and Syrian artists to work together while sipping Turkish and Arab coffee. The center also offers artists a chance to display and sell their work.

Berakdar, the owner of the workshop-café, told Anadolu Agency (AA) that he moved to Istanbul with his family in 2012, a year after the civil war in Syria broke out. He said that it was getting hard to live in Syria, and recounted: "I came to Turkey and settled in Rasimpaşa in Kadıköy with my wife and son. It was impossible for us to stay in Syria because of the war. At first, we decided to stay in Syria as long as we could, but after a while everything was clear. We could not sleep due to the bullets and bombs. We were surrounded by machines of war. My son is 10 years old. I left my country to be able to give my son a better life."

Berakdar mainly focuses on photography, but he produces artwork in almost every field. "I make art installations, organize art festivals and hold photography and group exhibitions," he said.

He said that he and his friends want to get away from the images of war as much as they can. "We only focus on art. We do not care about whether the artists who come here are refugees or not, the important thing is their artistic creativity and productivity," Berakdar said. The Syrian artist and his circle also welcome Turkish artists and they organize joint projects. "We are trying to melt the ice between two nations" Berakdar said, "We are people of the same region and culture."

When Berakdar initiated his workshop-cafe project, he was on his own, but the cafe became what it is today with the participation of other artists. Commenting on the neighborhood where Arthere Workshop-Cafe is located, Berakdar said: "My neighbors are very helpful. When we first opened the cafe, the iron worker across the street helped me. I can ask my neighbors to keep an eye on the place for five minutes or so. This is a very beautiful thing. People are warmhearted neighbors to each other just like in Syria. At first, we were strangers to them. In time, they got used to me as well as other artists who visit the art center."

Berakdar said it was hard to express their ideas and produce art in Syria as it is governed by a dictatorship. "There is no freedom in Syria. We could not talk, do what we want or open an art center. There was censorship. When I came here, I asked people whether I could open an art center or not and they said, 'why not.' They told me that I can organize concerts, meetings and exhibitions. I prepared my papers in a week," he said. He said that he pays his taxes and contributes to society, which is important for him. "We also help other Syrian artist to produce art and show people the artistic side of the Syrian people. We can do whatever artistic events we want in Turkey," he said.