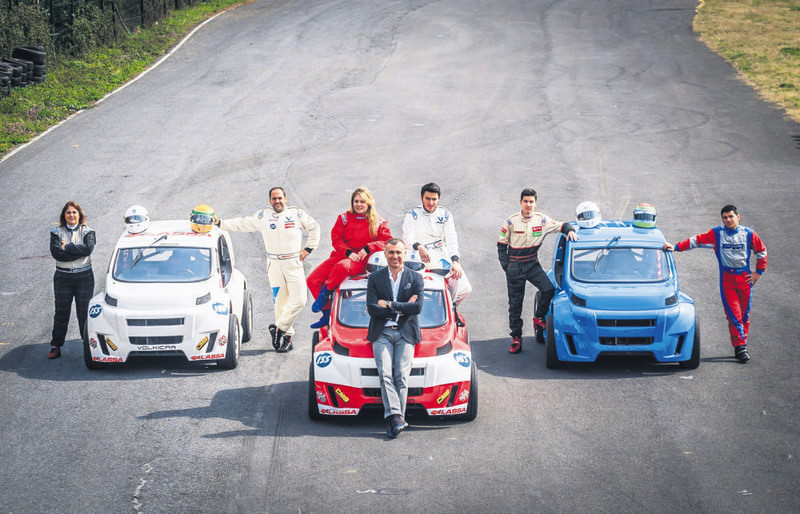 Speed is their passion and it shapes their lifestyle. From a mother of twins to young people, the Volkan Işık Academy in Istanbul welcomes people eager to become racing car drivers. The academy, which is the only one of its type in Turkey, has trained many well-recognized drivers over the past 12 years. So far, the academy has trained drivers such as Burcu Çetinkaya and Dağhan Ünlüdağ and continues to train many other talented people whose names we may hear in the future. We visited the academy, located at the Yıldız Technical University's Davutpaşa Campus, and interviewed veteran racing driver Volkan Işık as well as others currently training there.

"The future Schumachers are trained here," said Işık, adding that they not only offer racing driver training but also courses on safe driving techniques. Işık has broken new grounds with his academy. "We opened the first racing driver academy, manufactured the first domestic racing car, named 'Volkicar,' and organized the first local V1-V2 Challenge race events. We created our own rules in view of the international rules for the V1-V2 Challenge," he said.A training team of four people give courses to students. Following the training sessions, they learn from Işık's racing experience. Işık offers personal training to students and a road map is prepared for any trainee who wants to be a racing driver. The academy has trained countless racing drivers. Burcu Çilingir Ürkmez, 39, mother of twins, is one of the drivers the academy has trained. Her husband, Gürcan Üzmez is a former Turkish rally champion. Üzmez raced for the first time seven years ago and enrolled at Volkan Işık Academy's "First Step to Rallying." "I am a mother of twins but speed is my passion. The men I compete with joke about me and tell me not to overtake them, but it is a great pleasure to beat them on the track. There are not many people who are interested in speed racing. I trained at this school and I can tell you that women are much more successful at racing than men. I have an intrepid spirit during the races. Interest in racing is growing among women and the number of female racers has increased thanks to schools," Üzmez said.

Gökmen Erkek, 32, another racing trainee at the academy, is following in the footsteps of his father Sıtkı Erkek. Gökmen Erkek, who was the first person to race in the Turkish Track Championship without a driving license, had to take a break from the racing world due to education and business life. However, he has not lost his passion for racing. "If you begin in motor sports, you never let it go. Like women who dream of wearing a wedding gown, our dream is to wear racing jump suits. Racing tracks are perfect for those who crave speed and adrenaline. The sound of an engine is like a symphony to me. This is the first racing school that teaches how to be a racing driver from scratch, how to drive safely as well as sporting principles. Anybody can be a rally driver. The new generation are promising; they are ready to explode onto the scene," said Erkek.

Tamer Emre Hasbay, 20, is a university student who spent 12 years in a sailing team and has turned his hand to racing last year. Hasbay has also won the V2 Challenge race. "I decided to become a racing driver. My other family members also took courses here. I am heading toward my dream. Many champions have been trained there. I wish there were more schools for racing drivers in Turkey," he said.

Another young member of the school is 17-year-old Ayhancan Güven. He was five years old when he found himself in a racing car and a year later he entered his first competition. Güven does not know the number of cups he has in his room and his mind is now full of Formula 1 dreams. "I have entered over 100 competitions. I am here to see the Volkicar and will be in the V1 class. My dream is to become a Formula 1 champion."

The next racer is Ali Türkkan, 15, a high school student. His father took him to racing competitions when he was very small. Like Ayhancan Güven, Türkkan participated in the qualifiers for the 25 Little Big Men when Formula 1 came to Turkey. "I have spent my weekends racing since childhood. Racing gives you a very special feeling and speed is a passion for me. I have a long way to go but I want to participate in international competitions. I feel happy doing something different. The interest of young people in motor sports has increased in recent years," he said.Billur Hasbay, 24, is another driver trained at the academy. Nearly all members of Hasbay's family are racing drivers. Within a short period of time, she has been able to participate in the Turkish Rally Championship together with her mother. Stating that it was a great pleasure to race with her, Hasbay said, "My mother was the co-pilot. Both of us dream of becoming a world champion. The Turkish Rally Championship features four female teams. I think more women should engage in racing." Hasbay's story with the school began when she participated in the V2 Challenge races. "The school will produce the future female racing drivers," she concluded.
RELATED TOPICS