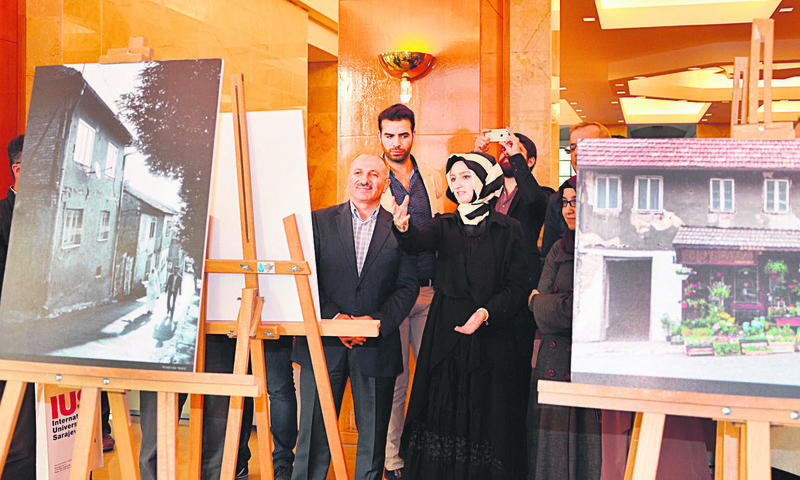 by Anadolu Agency Nov 24, 2015 12:00 am
The exhibition "Hayatta Kalma Sanatı" (The Art of Survival), which is meant to represent the lives of Bosnians following the Bosnian War, is on display at Cemal Reşit Rey (CRR) Concert Hall. Hosted by the International University of Sarajevo (IUS) and the International University of Sarajevo Alumni Association (IUSMED), the exhibition features photos and graphics about life after the war.

Speaking at the opening of the exhibition, IUSMED President Ubeydullah Sakin said, "Hayatta Kalma Sanatı' is one of the largest exhibitions created by their alumni, adding: "We wanted to show what happened in Bosnia through the eyes of our students and graduates. The exhibition was named after the struggle of people who tried to build their lives from scratch after being targets of the cruelest war since World War II." Sarajevo Education Development Foundation (SEDEF) President, Hasan Topaloğlu, told Anadolu Agency (AA) that they are very proud of the exhibition held by their students and graduates.

"The name of the exhibition is as important as the exhibition itself. Surviving is an art. The exhibition is also important because these young people understood the art of survival at a very young age," he said. Topaloğlu added that the structure of the region, as well as its architecture, attracts artists. "It is remarkable how students blend the education they received at IUS and the reality of the region they live in," Topaloğlu said. Zehra Gümüş, the curator of the exhibition, elaborated on the title of the exhibition. "We wanted to display and introduce Istanbulites to how the Bosnian people held on to life following the war. The exhibition features 40 works by Bosnian, as well as Turkish artists. As we see from the works, the people of Bosnia had a very different method to survive. They tried to survive during and following the war in a way that we can call 'art'," Gümüş said. The exhibition will remain open until Nov. 30.
RELATED TOPICS