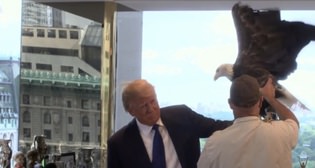 The footage was captured during an August photo shoot of Donald Trump to be featured at the magazine's famous cover. Trump was among the runners-up of the magazine's Person of the Year competition, but thankfully German Chancellor Angela Merkel finished at the top.

Time's article stated that the idea to feature Trump with "Uncle Sam" came from Martin Schoeller, the award-winning portrait photographer and frequent Time contributor who shot the cover.

The 27 year-old eagle's name comes from a famous army recruitment poster, which has become another prominent American symbol over time.

A native species of North America, the bald eagle is recognized as the national bird of the U.S.
Last Update: Dec 11, 2015 12:37 am
RELATED TOPICS