The history behind Christmas and Turkey 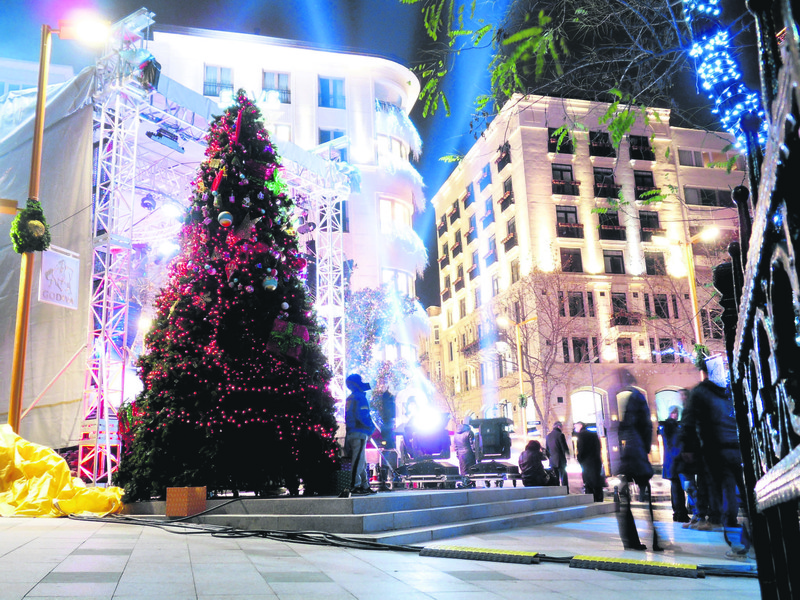 In Turkey, where Muslims make up 99 percent of the population, the New Year's spirit is still seen in the many historical and sacred places for Christians and the stories woven in to Turkish culture that paved the way for the New Year's celebrations

Even though Turkey's population is predominantly Muslim, the Christmas and New Year celebrations have become a tradition across the country, with huge pine trees along the roads and Christmas decorations across the big cities. 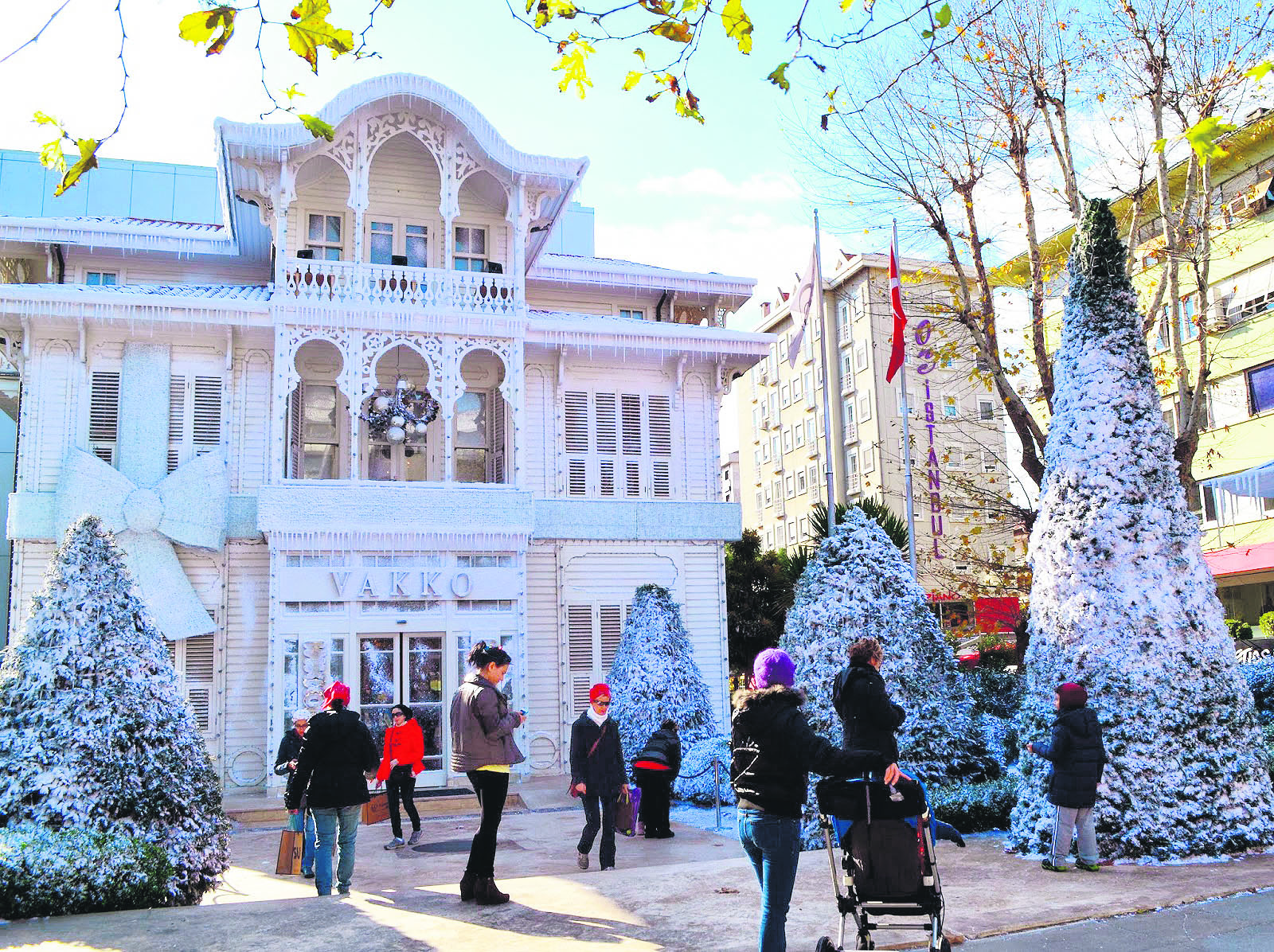 Turks do not celebrate the Christmas or the birth of Jesus, but they celebrate the coming New Year with new hopes in a shining atmosphere. As December arrives, the streets and cafes are decorated with lights and Christmas trees, giving expats the opportunity to feel as if they are home for the holidays. 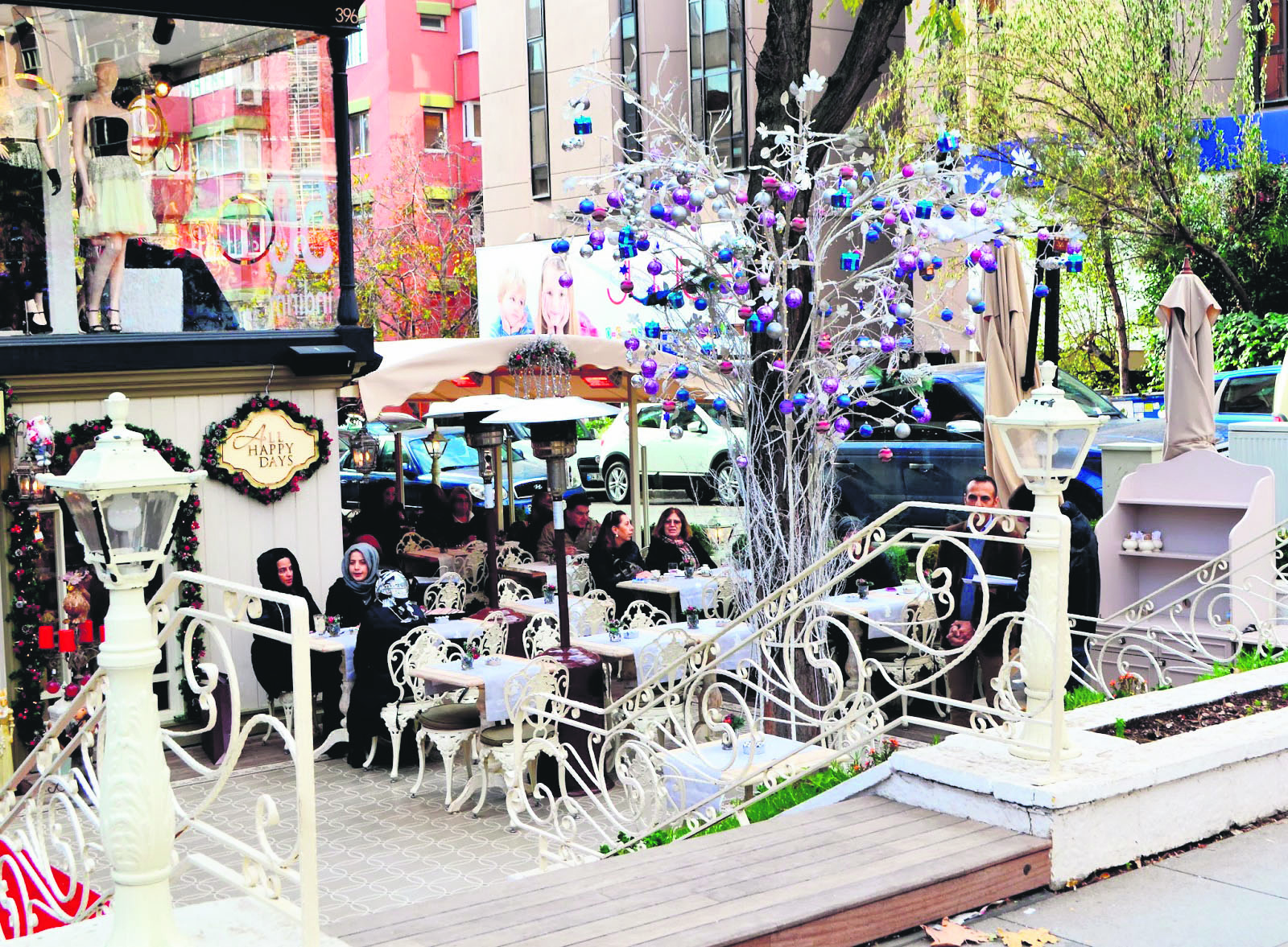 The history behind the Christmas is believed to have been born in the region that is now Turkey. The origin of Santa Claus, the Christmas tree story and the home of the Virgin Mary, all part of the Christmas spirit, are rooted in Anatolia.

Santa Claus - known as "Noel Baba" in Turkish which means Father Noel - lived in the fourth century A.D. in a place known as Patara on the southwestern coast of what was then the Byzantine Empire. His name was Nicholas and he was the son of a very rich family. When his parents passed away, Nicholas inherited a fortune. Later, he became the bishop of Myra, a town further up the coast from Patara, which is now called Demre. Being a generous and big-hearted man, Nicholas used to climb on the rooftops of people's houses and drop coins down their chimneys. When a citizen caught him in the act, his identity was revealed to the town and so the fairytale of the giving character Santa Claus began. 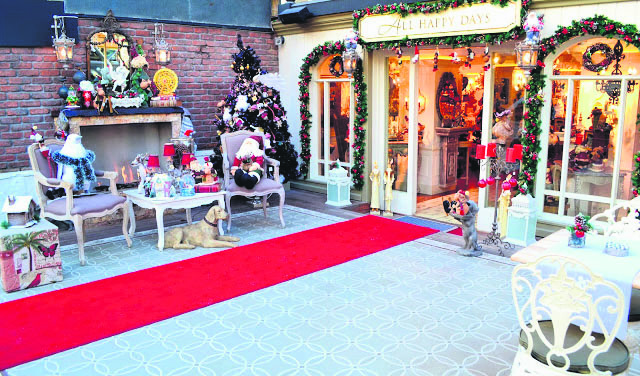 After Nicholas's death, a memorial was erected in the town and he was later canonized as a saint, which is why he is referred to as Saint Nicholas. Dec. 6 became associated with the feast of St. Nicholas and years later, a bishop declared Dec. 25 as Jesus's birthday. Over time, the two celebrations began to be fused together. 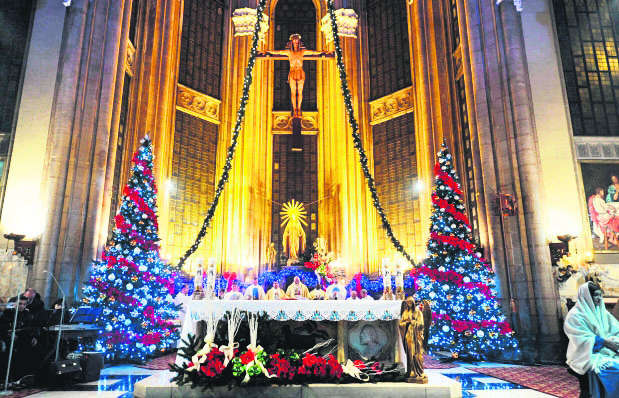 The Church of St. Nicholas is now located in the town of Demre in Antalya and special celebrations are held on Dec. 6 to honor him. The original coffin of St. Nicholas is also housed in the church, even though his bones were removed from the coffin in the 10th century.

The pine tree, a symbol of Christmas, is believed to be an evergreen tree which symbolizes the immortality of Attis, according to ancient legend. As the story goes, Zeus fell in love with Cybele, the goddess of fertility, but could not be with her and left his seeds on a rock instead. The hermaphrodite Agditis was then born from those seeds, which legend indicates are symbolized by the almond tree from which the male organ of Agdities grew and the daughter of the Sangarius River (the modern-day Sakarya River) was impregnated by the fruits of this tree and gave birth to Attis. It is believed that he had such a beautiful body that Cybele and Agditis had fallen in love with him. Attis is believed to have killed himself by cutting off his penis under a pine tree and he lived as a pine tree after death, as Cybele begged Zeus not to destroy his beautiful body. According to the legend, Cybele priests castrated themselves during their rituals and experienced the loss of consciousness and pine log in Cybele temple. For this reason the temple was decorated with shining sex organs, symbolizing the castrated priests. Thus, the tradition of displaying tree ornaments during the Christmas season is believed to be adopted from Cybele priest rituals, as Dec. 2 also symbolizes the rebirth of Attis.

House of the Virgin Mary 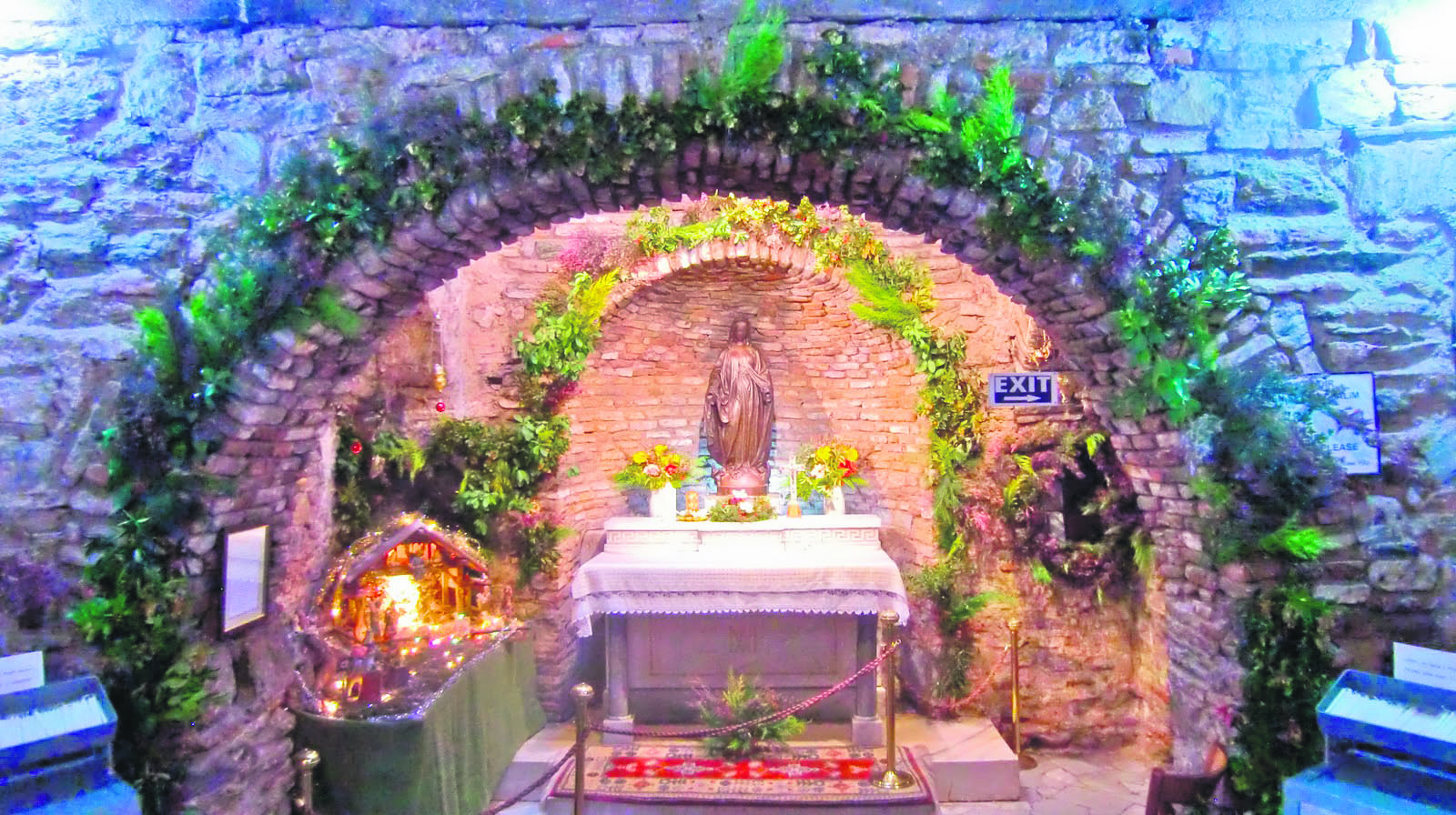 The House of the Virgin Mary is located in the western district of Ephesus, ancient city near the province of İzmir, and welcomes huge crowds during the Christmas season each year. Even though it is often mistaken as the Church of Mary, the House of the Virgin is a completely different religious destination, which is visited by thousands of Christian pilgrims each year. According to Christianity, the Apostle John brought Mary to this house in Ephesus after the Resurrection of Christ, and she continued her life there until her death. It is also believed that the house was built around the sixth or seventh century, although some experts say that it dates back to the first and fourth centuries. A German nun discovered the house in 1812. She awoke in a trance one night and described the exact House of the Virgin, even though she had never been there or traveled outside of her home. Differing from the House of Virgin Mary, the Church of Mary is also located in İzmir's Ephesus district and is highly significant for Christians. It is also known as the "Council Church," as it is believed that the Council of Ephesus gathered there.

The church is of great historical importance for Christian followers. It is also known as the "Double Church," since its aisles are dedicated to both the Virgin Mary and St. John. The church is a rectangular basilica with 250-meter columns. Today, the church is mostly in ruins but there are still some parts that have been preserved. When you enter the church, you will first see that its walls are adorned with crosses and metal rosettes. There is also a baptismal pool that has been very well preserved. What makes this place so special is not its glory or magnificence, but the history that lies beneath it. There are sealed graves both inside and outside of the church. Discovery of these graves led people to believe that the church remained open and was used by the local Christians until the 14th century. Historical accounts reveal that ecumenical councils were held in Ephesus around the year 431 to discuss the official title of the Virgin Mary, and the decision was made to give her the title, Theotokos (bearer of God). Later, many church leaders referred to her by that name.

How to spend Christmas and New Year's Eve in Istanbul

In Turkey's sleepless city of Istanbul, there is a perfect ambiance to celebrate Christmas and New Year's Eve with ornamented roads, street parties and many shopping facilities. If you have to spend this Christmas and New Year's Eve away from home as an expat, you can be rest assured that spending this time of year in Istanbul will be a good opportunity for you to experience the changing atmosphere across the city.

Istanbul offers many Christmas gift ideas for December, offering great souvenirs and unique presents for your loved ones. Many people have rushed into the boutiques, shopping malls and bazaars across the country for the huge New Year and Christmas sales. The Grand Bazaar, located on the historical peninsula, is one of the most popular destinations among expats and tourists looking to find the perfect souvenir for Christmas in Istanbul.
Street parties are another option for you to welcome the New Year in Istanbul. In fancy districts such as Nişantaşı, Etiler, Kadıköy and Beyoğlu, many people will gather to welcome the New Year with all-night parties on Dec. 31. The streets in those districts are decorated with Christmas lights and decorations to make you feel happy and delighted. Fireworks over the Bosporus are another New Year's Eve tradition in Istanbul. The church of St. Anthony in Beyoğlu is a perfect destination to experience the Christmas spirit as well as to experience Christian-Byzantine heritage. The church also hosts world famous musicians during this time of the year.

When the clock strikes midnight, an amazing fireworks show takes place over the Bosporus and the perfect places to watch the show include Ortaköy and Beşiktaş on the European side. Many concerts put on by Turkish singers are also happening in concert halls across the city, so if you have a favorite Turkish singer, you should find out where your favorite artist will be taking the stage this New Year's Eve. Other places to visit this season include the beautiful churches of Istanbul, the sacred places of Christianity in Antalya, or the ancient city of Ephesus. At Christmas time these historic sites are adorned with Christmas décor, which is sure to amaze visitors with a lively atmosphere and lighting to make you feel the Christmas spirit as soon as you enter.
RELATED TOPICS