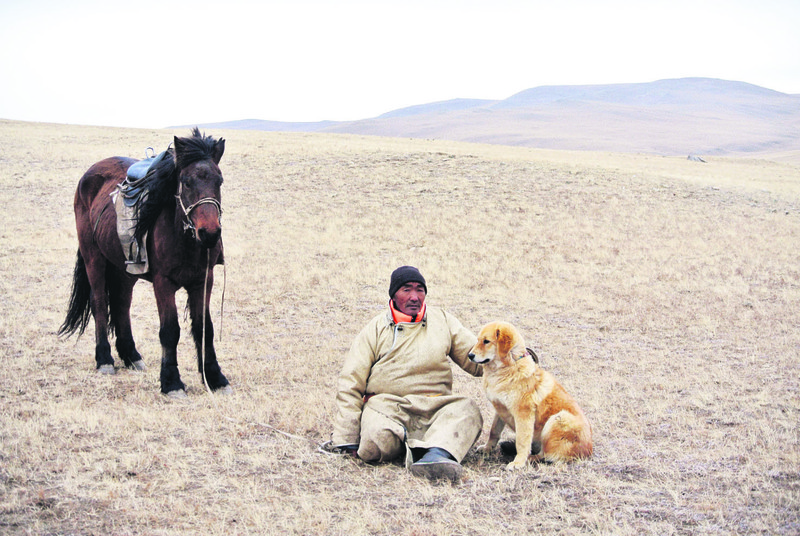 by Associated Press Dec 21, 2015 12:00 am
Through three decades of marriage, they have wandered together across the rolling hills of Mongolia's northern Tuv Province, accompanied by their herd of sheep and stalked by the wolves and snow leopards that threaten their livelihood. Five months ago, Chulunjav Bayarsaikhan and Tumurbaatar Davaasuren were joined by a new partner, Hasar, a shaggy, 11-month-old bankhar dog that a hundred years ago would have been a far more common sight outside the country's tent homes known as gers. "Now, nothing comes near our herd at night," Tumurbaatar said. "If anything does, she barks in an alarming way, so we come out before it can attack. She learned to patrol all night and is protecting them well." As years of overgrazing increasingly push Mongolian nomads into the territory of their oldest foes snow leopards and wolves a group of researchers and herders are trying to reinstate the bankhar, a close relative of the Tibetan mastiff, to its historic place beside their masters. The dog is native to Mongolia but nearly disappeared over the course of mass urbanization drives during the Soviet era.

For thousands of years, the giant dogs roamed the Mongolian steppes with their nomadic masters, so much a part of the landscape that they featured in Chinese Qing Dynasty paintings of Mongolia and the 13th century travelogues of Marco Polo. Now experts are hoping to revive that legacy. At the small nonprofit Mongolia Bankhar Dog Project outside the capital, Ulaanbaatar, biologists and breeders say the shaggy, intelligent bankhar could help conservationists convince herders that they need not aggressively trap and hunt endangered predator species. The center raises bankhar, which can grow as large as a small bear, and hands them over at 4 or 5 months old to herders like Chulunjav and Tumurbaatar, who must continue to train them under a strict regime aimed at developing their bond with livestock rather than humans. Hasar now follows sheep day and night and wards off, but doesn't attack, predators that once decimated the couple's herd.

Using dogs to protect herds also can help protect snow leopards as their population falls below 1,000, mostly in the western Altai mountain range and in the south, near the Gobi Desert, according to WWF Mongolia director Batbold Dorjgurkhem. "The habitat that is needed by snow leopards is shrinking, due to increasing livestock numbers in Mongolia," says Batbold. "Because of this, there is a conflict between herders and this top predator."

Falling numbers of snow leopards are also unsettling Mongolia's ecosystem, Batbold added. Among the snow leopard's prey are disease-carrying marmots, whose numbers are proliferating as their chief predator's population declines. Greg Goodfellow, a scientist at the Mongolian Bankhar Dog Project, said larger herd sizes and the ensuing demand for grazing land are key factors behind the shrinking snow leopard habitat. With fewer livestock lost to predation, the group hopes herders will be able to reduce livestock numbers, easing the need to push further into leopard territory. The dog project is seeking grants to set up regional breeding centers throughout Mongolia. There are now 10 adult dogs at the group's first breeding center. A further 15 dogs already have been placed with qualified herders, including in the Gorkhi-Terelj and Hustai national parks where wolves reside, and in South Gobi province, where snow leopards prowl. If trained correctly, the bankhar's large size and intelligence makes it especially suitable for guarding livestock, said dog project caretaker Davaasuren Munkhsuld. "Mongol bankhars know how to act in difficult situations. They know how to take control," Davaasuren said. "They sense if a person or other animal has come with good or bad intentions, then decide whether or not to attack. They are very intuitive."
RELATED TOPICS