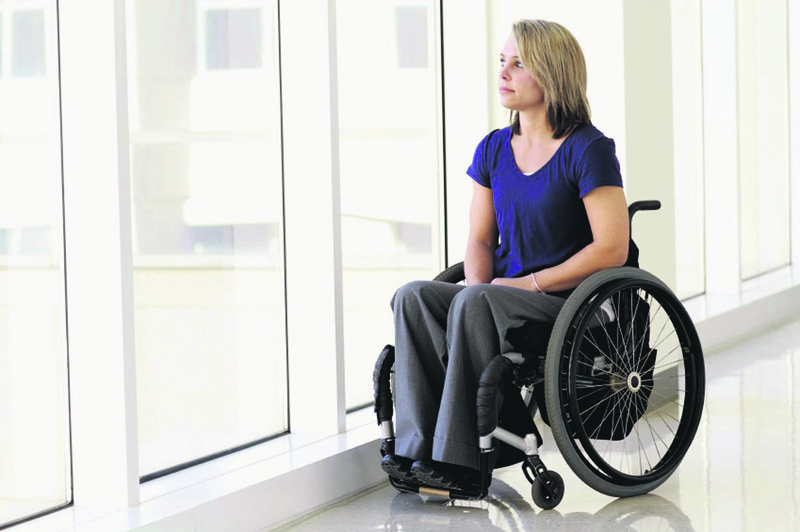 Although there has been increasing awareness about violence against women, there is a particular group whose agony has been largely unnoticed: Disabled women.
by Tuncay Kayaoğlu Dec 22, 2015 12:00 am

Although some serious steps have been taken to reduce violence against women in Turkey through prejudications in particular cases, Turkish women still face numerous problems. Furthermore, physically or mentally impaired women are more vulnerable to harassment, violence and social inequality

Turkey has witnessed major protests, gatherings and high-profile court decisions in recent weeks, showing that efforts to tackle violence against women have taken on a new intensity in a very public manner.

At the political level, Prime Minister Ahmet Davutoplu recently used a U.N.-backed meeting in Istanbul to call for a "multi-dimensional fight" to end violence against women.

On the legal front, a court in the southern city of Mersin handed down aggravated life sentences to three men involved in the brutal murder of a young female university student, Özgecan Aslan, whose death sparked outrage across the country earlier this year.

In symbolic protests, iconic Istanbul buildings, such as the Maiden's Tower and Bosporus Bridge, were colored orange in December to raise awareness of violence against women.

The month before some women presented roses to men flocking out of an Istanbul mosque after Friday prayers, as part of an awareness-raising campaign.

Sare Yılmaz, chair of the Istanbul-based Women and Democracy Association, told Anadolu Agency that NGO work was critical for positive change on the legal front, but more had to be done. She said, "I hope such change will translate into a mental change."

Newly appointed Family and Social Policies Minister Sema Ramazanoğlu described violence against women as a "societal problem" that requires a fundamental change in attitudes to solve. "It is not a problem where you can say, 'Let the ministry solve this problem.' NGOs, opinion leaders, the media and family have important parts to contribute to this mental change," she said on Nov. 30. Although there has been increasing awareness about violence against women, there is a particular group whose agony has been largely unnoticed: disabled women. There are over eight million disabled citizens in Turkey, according to the Istanbul-based Foundation for the Physically Handicapped. İdil Seda Ak, an activist with the Ankara-based Disabled Women's Association, said disabled women face "double disadvantages." "Being a woman with a disability make things worse," Ak said.

Bahar Yavuz, a 22-year-old psychology student, told Anadolu Agency about a typical incident where her blindness left her vulnerable: "I was at a metro station. One guy was trying to grab my arm and lead me somewhere else. I began to speak in English. He muttered some words in English but later went away." Yavuz sometimes prefers to use her physical strength to deter molesters, especially in queues waiting to get on public transportation. She is also "tired" of explaining herself to people. Yavuz says she knows many disabled women who are insulted when people ask: "Where is your owner?" or "Why did you go out alone?" She said, "It is tiresome to go out," adding, "How many times should I explain myself or to how many people?"

Recent research prepared by the Disabled Women's Association revealed that disabled females could face violence and abuse in Turkey, while data compiled by the Violence Prevention and Watch Center (SONIM) showed that at least 69 disabled women applied to shelters for battered wives. Forty-eight of these women have reported psycho-social problems since 2012, the SONIM report disclosed. The association is leading a campaign with reports, including photos, showing some of the abuse and violence faced by women and girls with disabilities.

However, this is a global problem. The United Nations has acknowledged that women with disabilities experience "double discrimination," which heightens the possibility of gender-based violence. The U.N.'s 2006 Convention on the Rights of Persons with Disabilities recognized that women are often "at greater risk of violence, neglect or negligent treatment, maltreatment or exploitation."

Ak said that awareness regarding disabled people has increased in recent years despite the current unpalatable situation. "We have new momentum. Disabled women have begun to express [their problems] more often," Ak said, but added that organizations working for disabled people - many of which are headed by men - have not properly prioritized women's problems.

Twenty-two-year-old Yavuz complains of a lack of public empathy and awareness regarding disabled women's problems. Although there are public and civil society efforts to improve the conditions of disabled people and combat violence against women, the situation of disabled females, like Yavuz, has been slow to change. Saying she wants to live in a developed, Western country rather than wait for improvement in Turkey, Yavuz adds, "I have one life, after all."
Last Update: Dec 22, 2015 12:08 pm
RELATED TOPICS