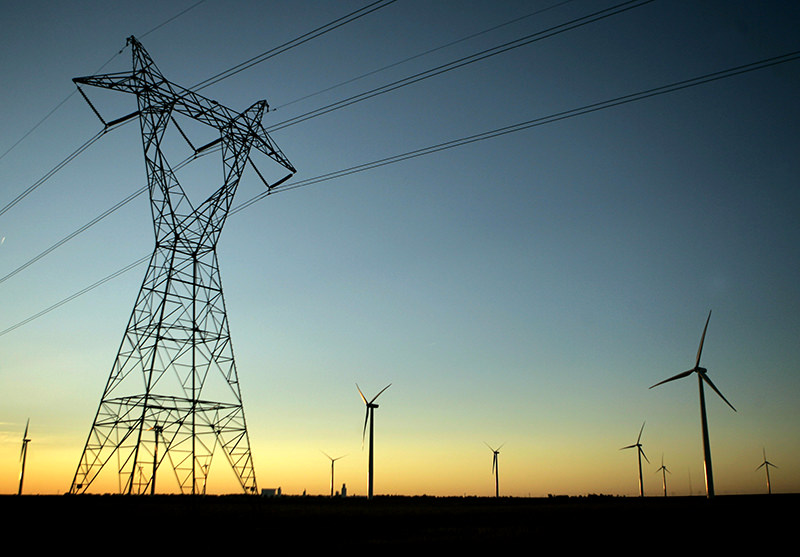 In this photo taken Sept. 27, 2006, high-voltage electric transmission lines pass through a wind farm in Spearville, Kansas. (AP Photo)
by reuters
Jan 04, 2016 12:00 am
Climate change could lead to significant declines in electricity production in coming decades as water resources are disrupted, said a study published on Monday.

Hydropower stations and thermoelectric plants, which depend on water to generate energy, together contribute about 98 percent of the world's electricity production, said the study published in the journal Nature Climate Change.

Shifts in water temperatures, or the availability of fresh water due to climate change, could lead to reductions in electricity production capacity in more than two thirds of the world's power plants between 2040 and 2069, said the study from an Austrian research centre.

"Power plants are not only causing climate change, but they might also be affected in major ways by climate," said Keywan Riahi, Director of the Energy Program at the International Institute for Applied Systems Analysis (IIASA).

"(Due to) climate change it will be increasingly difficult to provide reliable services at affordable costs," Riahi, one of the study's authors, told the Thomson Reuters Foundation.

Hydropower plants rely on water to move turbines, while thermoelectric plants, including nuclear and fossil-fuel based generators, need fresh water to cool their systems.

Countries and companies need to make power plants more efficient to respond to the potential decline, in what scientists said was the first study of its kind to analyse the global impacts of global warming on electricity production.

The problem will become particularly acute during summer months and other periods of high electricity consumption. These periods usually coincide with higher water temperatures which make it harder to cool down power plants, Riahi said.

On a monthly basis, the study said as many as 22 percent of hydropower plants could experience "strong" reductions - more than 30 percent - in their capacity.

For more than two thirds of thermoelectric stations there could also be a strong monthly reduction.

Companies should invest in new technologies to mitigate the impacts of climate change on electricity generation, including switching from fresh water cooling systems to air cooling systems, Riahi said.