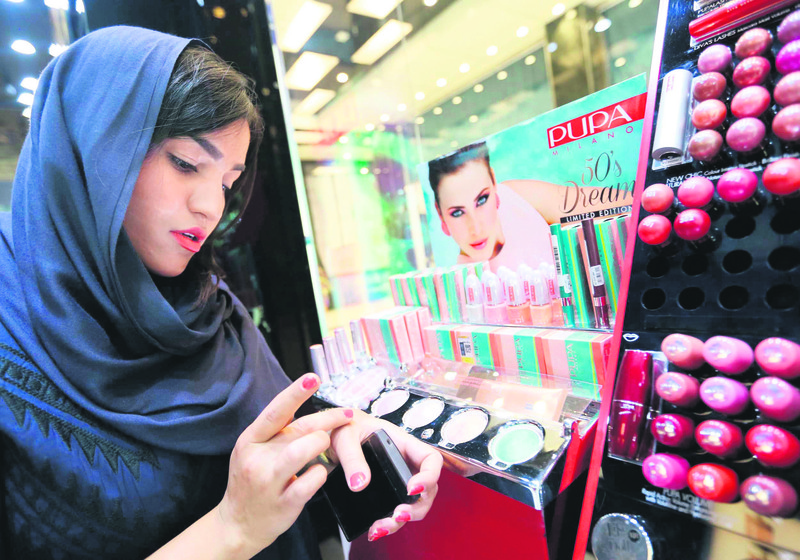 Botox injections in cheeks or foreheads to conceal wrinkles, collagen in lips to make them fuller or eyebrow tattoos to replace painful plucking or threading u2013 removing eyebrow hairs with a piece of string u2013 are becoming common in Iran.
by French Press Agency - AFP Jan 04, 2016 12:00 am

Known for being keen on cosmetics and beautifying products, Iranian women have been caught up in the frenzy of cosmetic surgery with nearly 40,000 operations recorded last year

Lying on an operating table in northern Tehran, Nazanine said she wants it all: A third nose job, her eyebrows tattooed and liposuction on her thighs to "fix" her figure. The patient in her 40s "had two nose jobs with another doctor, but wasn't happy and asked us to do it again," said her doctor, Javad Amirizad, the latest surgeon to take her under the knife.

In a conservative society where all women in public must wear at least a scarf over their hair and neck, such operations have boomed, with a nose job seen as a way to perfect their most visible asset. But the quest to look better goes much further: In two nearby rooms at Amirizad's private clinic, women were having their breasts enlarged. Liposuction is another procedure on the rise and Iranian women - not just the wealthy in the capital - are also paying for less invasive cosmetic changes.

Botox injections in cheeks or foreheads to conceal wrinkles, collagen in lips to make them fuller or eyebrow tattoos to replace painful plucking or threading - removing eyebrow hairs with a piece of string - are becoming common.

According to official figures, up to 40,000 cosmetic surgeries take place in Iran each year, said Amirizad, a member of the Iranian Association of Cosmetic and Plastic Surgeons. More than 60 percent are nose jobs. But he said the actual number is much higher as official statistics do not include operations by non-specialist surgeons who are cashing in on people's desire to improve their looks. In Iran's largest cities it is easy to spot women - but also men - with bandages on their noses, flaunting the fact they recently went under the knife. The trend has seen the Islamic Republic jump into the world's top 10 countries performing plastic surgery. In 2013, it ranked fourth worldwide - after Brazil, Mexico and the United States - for nose jobs, the International Society of Aesthetic Plastic Surgery reported.

The cost of a nose operation starts at around $1,500 - more than five times the minimum Iranian monthly salary of $270. Mehrnaz Mehri, a 27-year-old manager at a food trading company in Tehran, said she paid closer to $1,800 but considered it good value. "I know some famous surgeons ask for up to $6,000 for a simple nose job," she said. "I never thought I'd have an operation, but when my mother and sister got their noses done, it was contagious."

Television is playing a part is the cosmetic surgery craze. Hugely popular South American and Turkish soap operas, beamed into homes via banned satellite dishes, show actresses looking beautiful after plastic surgery. Such channels, watched by more than half of the population, broadcast round-the-clock advertisements for nose jobs, slimming creams and stomach-sucking corsets. Patients also fly in for cosmetic procedures, Amirizad said. "We get them from Iraq and Azerbaijan, but we mostly get Iranian women from abroad who know an operation is much cheaper in Iran than in the United States or other European countries," he said.

And these days, plastic surgery is not just for women. "Twenty years ago, about 5 percent of men wanted nose jobs," said the surgeon. "Today it's 35 percent." Mostafa Kashani, in his early 30s, is one of them. "I broke my nose in an accident. After I got married, my wife insisted I get it fixed," he said. "I refused, but then my sister had it done and it motivated me." Amirizad sees this as a sign of progress: "It shows our society is modernizing."

But some Iranians are saddened by what they see as a Western cultural trend that may be going too far. Earlier this year a Facebook page called "Iranian Women Up Close" asked followers to post pictures of their noses to push back against beauty being defined as a surgically enhanced concept. Several hundred women did so under the heading "Pictures of My Natural Nose." Some women who have had surgery understand the debate. Slomaz, 27, had wanted her nose redone since being a teenager and was just 20 the first time she went under the knife, but now said she wouldn't do so again. "Girls now all have the same type of nose - a very thin one with an upturned end like a doll," she said.
Last Update: Jan 04, 2016 9:38 pm
RELATED TOPICS