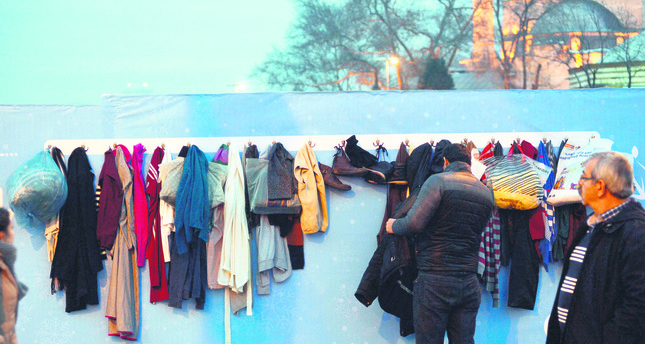 by Daily Sabah with AA Jan 06, 2016 12:00 am
A recent campaign "Dolabında durmasın, sokakları ısıtsın" (Take them out of the closet and warm the streets) initiated by the Humanitarian Relief Foundation (IHH) and Üsküdar Municipality provides second-hand clothes to homeless people.

The clothes are hung up at a stall opened at Üsküdar Square. Salih Adıyaman of the IHH said that there is nobody waiting at the stall. "It is because we want to emphasize the need for trust among people.

As long as trust remains a problem, people do not tend to do favors for others," Adıyaman said, reminding others of the phrase "to cast one's bread upon the waters." "I hope we can help homeless people and others in need," he continued.

Adıyaman said that the İHH is planning to continue the project in the coming years. "In winter, poor or homeless people do not have the opportunity to buy warm clothes. We collect clothes that we do not need as well as new clothes. Some poor people are embarrassed to ask for clothes even though they need them. This is why we leave the stand unmanned.

Donators can bring clothes to the stall and poor families can take any clothing item they want here," he said. Similar campaigns are also taking place across the country including Tokat and Kayseri with the initiatives of local individuals and organizations. Last month, a similar practice was initiated across Iran through "walls of kindness."

Appearing in major Iranian cities, the clothes were hung on walls and generated an online debate about efforts to help the poor, the BBC reported. "The drive increased in popularity as severe cold weather recently engulfed the country. Photos of walls across the country have been posted by several users, who are asking their fellow citizens not to let any [homeless people] shiver in the cold this winter," BBC further stated.
Last Update: Jan 06, 2016 11:56 am
RELATED TOPICS