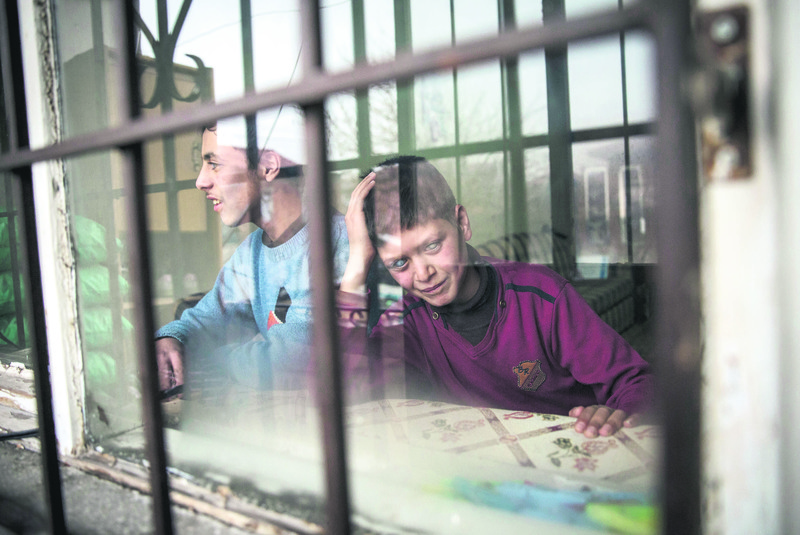 Awaiting a cure for blindness in Ankara, two Aleppo brothers Ammar and Muhammed Atiye strive to keep their hopes for a decent future

The lives of two blind teenage brothers from Aleppo may seem hopeless on the outside, but Ammar Atiye and Muhammed Atiye harbor dreams of becoming scholars in Ankara someday.

Their eyes are as white as snow, but their dreams are as colorful as the grape purple paint on the outer walls of their informal learning center building on Önder Street in the outskirts of a poor neighborhood in the Turkish capital. The Atiye brothers were born blind, but it is believed that doctors can cure their blindness if a donor pays for the expensive treatment.

While they await the arrival of such a miracle, the Syrian duo rely on learning the word of God for hope and support. With their fingers on a braille Quran at the center called Madrasa-tul-Tafawwuq (Arabic School of Success), the brothers told Anadolu Agency (AA) about their desire to learn the Turkish language and science as well as their high aim to don the robes of religious scholars someday.

The brothers arrived with their family in Turkey in 2014. Thirteen-year-old Ammar recalled his normal life in Aleppo's al-Shaar neighborhood before it came under attack by the Bashar al-Assad regime. He remembered how the family moved to the Tel Jibin village and sought shelter there for eight months when their father abandoned them and then came back to take them to safety in Turkey.

Muhammed, the older 17-year-old brother said that since they now live in safety in Turkey they want to pursue their high school and university education like other youths their age. He wishes he could own a laptop that could help him with his special needs education.

While the opportunities provided at the center are inadequate in meeting the needs of the Syrian children, especially those with special needs, it is a small step towards enabling people like the two blind brothers from Aleppo to get a second chance in life.

The man behind the establishment of the center, 25-year-old Syrian Yusuf Mohamad, told AA that he grew inspired to educate Syrian children while he was doing humanitarian work.

"While distributing humanitarian aid to Syrians, I found out that something was amiss," Mohamad said.

"Education," he said in his cold, makeshift office in the dilapidated building. "Syrian children [here] were wasting their time in front of television sets and on the streets learning how to swear," Mohamad said, adding that he wants to keep children off the streets.

While this man's efforts are commendable, a lot more needs to be done to keep Syrian children off the streets. Outside of the center, several children could be seen standing around a fire to keep themselves warm in the biting cold, while some children could also be seen selling second-hand shoes at Önder Street, which has been a hub for nearly 40,000 Syrians seeking shelter in Ankara.

Meanwhile, Mohamad conveyed how the children at his center remain scarred by the war in Syria.

"When some children hear the sound of lightning, they say 'planes are coming' and try to hide [themselves in the small classrooms], some were also drawing [images of] blood and tanks [during their initial days at the center], but now they are drawing flowers and mosques," he said.

There are two separate buildings for male and female students at the center, which is run locally with the support of volunteers. Around 300 students, including 200 male students, are taught the Quran along with mathematics, biology, geography and Turkish language.

Muhammed recalled the humble origins of his center when it didn't even have proper heating in 2013. He said the endeavor would not have been possible without the support of his Turkish and Syrian friends.

Another 25 Turkish volunteers heard about the center and are now helping students learn the Turkish language, Mohamad said, adding that his "Turkish brothers" also helped in providing educational materials. A private Syrian school in the southeastern province of Gaziantep also gave the center textbooks and notebooks.

"There are some 12-year-old children who have just learned the alphabet," Shihabi said.

The task faced by the government and private organizations to help the Syrian left at least 250,000 people dead so far, according to the U.N., while Turkey has hosted more than 2.5 million refugees since the war started.

According to Yusuf Büyük, a deputy undersecretary of the Education Ministry, some 300,000 Syrian refugees who fled their country due to the civil war are currently being offered an education in Turkey, with great efforts being made to integrate Syrians into the educational system in the country's 81 provinces.

While centers like Yusuf Mohamad's on Önder Street run independently, they always help bring the Turkish government's plan to educate all Syrian refugee children in the country into being.

Although the School of Success's true accomplishment will only be realized in the years to come, it is already making a difference.

Hassan Jumma, a 12-year-old child from Aleppo is one star example at the center, who spoke Turkish fluently with AA. "I am very happy with my teachers here," he said. Another 12-year-old Abdul Azeez Mohamed, who has been in Ankara for the last seven months, said: "May Allah be pleased with them, it [the center] has numerous benefits; I am learning some science and some [verses of the] Quran," he said.
RELATED TOPICS