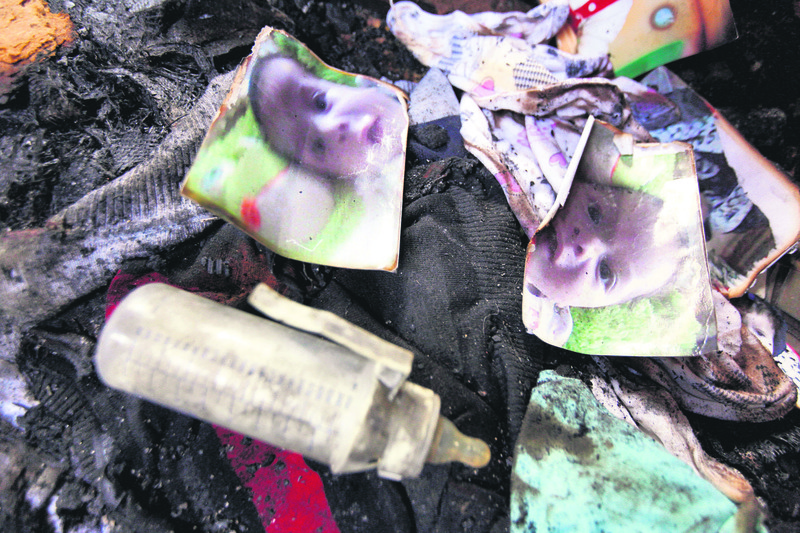 by Anadolu Agency Jan 08, 2016 12:00 am
The Palestinian Authority is planning to turn the house of the Dawabsheh family, which was set on fire by Jewish extremists in a deadly attack last July, into a museum. "This year, the house of Saeed and Riham in the village of Duma, will be turned into a museum in order to expose the brutality and the ugliness of the Israeli occupation and its settlers," Nasser Dawabsheh, Saeed's brother, told Anadolu Agency (AA). Nasser is the uncle of Ali, the 18-month-old toddler who was killed in the arson attack. He said the family succeeded in preserving a number of items from the torched house.

"Baby Ali's stroller, [his living brother] Ahmad's toys, the parent's bedroom, half-burned photos and many other things will be available for visitors," he said. "No one should forget what settlers did to my brother's family, and their home will remind the entire world about the crime forever." Meanwhile, Mohammad Dawabsheh, the representative of the Dawabsheh family, said the structure of the museum is almost done. "The Palestinian Authority allocated 3 million shekels ($760,000) to renovate the house and turn it into a museum," he said. The Dawabsheh Museum will include humanitarian, legal and political messages to the entire world, he added.

The July attack near the occupied West Bank city of Nablus killed Ali and his parents, and left 4-year-old Ahmad with serious injuries. The deadly arson attack sparked outrage among Palestinians, and the long delay in justice has been considered a factor behind recent violence between the Palestinians and the Israelis.
RELATED TOPICS