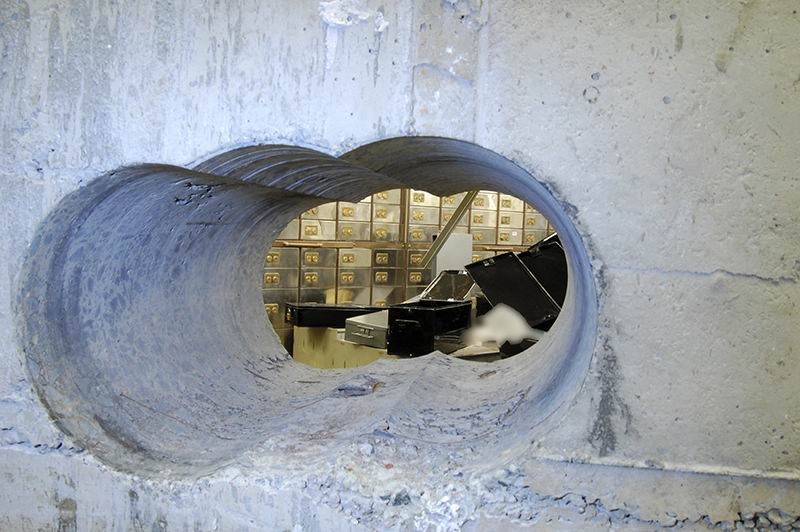 Holes were bored through a half-meter thick concrete wall drilled to access a vault in a safe deposit centre in Hatton Garden, London. (AFP Photo)
by reuters Jan 14, 2016 12:00 am
Three men were found guilty on Thursday over the largest burglary in English legal history, a daring multi-million pound raid on a safe-deposit business in London's jewellery district led by pensioners who had spent a life in crime.

In a meticulously planned plot, the gang broke into the vault of the Hatton Garden Safety Deposit building during the long Easter holiday weekend last year.

They entered an elevator shaft and climbed down to the vault where they used heavy cutting equipment to drill through a thick concrete wall. Initially thwarted, they returned the following day and ransacked 73 deposit boxes, stealing jewels, gold and cash worth 14 million pounds ($20 million).

Only about a third of that has been recovered, including some which was hidden under headstones in a north London graveyard.

The combined age of those involved was about 500, with the youngest 42 while two were in their 70s.

Brian Reader, 76, the oldest and one of the ringleaders, got to the scene of the crime on a bus using his senior citizen pass entitling him to free travel.

Reader was no stranger to such crimes and had been jailed in the past over a notorious 1983 heist at the Brink's-Mat high security vault at Heathrow Airport when 26 million pounds worth of about 6,800 gold bars and 100,000 pounds of diamonds were stolen.

The audacious nature of the raid also rekindled memories of other renowned crimes such as the Great Train Robbery of 1963, when a 12-member gang ambushed a Royal Mail night train, a heist immortalised in several films making those involved famous.

While a lawyer representing one of the gang suggested the Hatton Garden raid could be made into the movie "Bad Grandpas", detectives said the gang might be old but they were dangerous men, with a string of convictions for armed robbery.

"They had a long history of criminal activity behind them."

On the evening of April 2 last year, the gang met at the Hatton Garden Safe Deposit and were let in through a fire exit by a red-haired man known as "Basil" who has not been identified and is still at large with a 20,000 pound reward on his head.

Although they disabled alarms as they went, one was triggered. A security guard who went to the scene saw nothing untoward and the police failed to send any officers, a mistake for which they have apologised.

The gang began the long process of drilling through the 51 cm (20 inch) thick concrete wall but initially could not get inside because a cabinet containing deposit boxes was in the way.

The next day they returned with new machinery, forced the cabinet out of the way and climbed into the vault where they opened 73 of the 999 boxes.

Detectives were able to trace a white Mercedes car they used to track down the main conspirators - Reader, John Collins, 75, Terry Perkins, 67 and Daniel Jones, 60.

They watched and listened in the next few weeks as the suspects met up in cafes and the Castle pub in Islington, north London where the heist was originally planned to discuss what to do with the loot.

When they arrested the gang, they found a small smelting machine, diamond-testing equipment, and tools to separate gold from diamonds. Among other items recovered was a "Forensics for Dummies" handbook.

Jewellery was also found in a bag hidden under the gravestone of the father and brother of Jones's partner.

The main figures in the heist pleaded guilty to conspiracy to burgle in September. Two more, William Lincoln, 60, and Carl Wood, 58, were convicted at Woolwich Crown Court of the same charge on Thursday while Hugh Doyle, 48, was found guilty of concealing stolen property.

Another man was cleared of any involvement while Perkins' daughter and her brother-in-law also admitted conspiracy to conceal criminal property.

The gang will be sentenced in March.