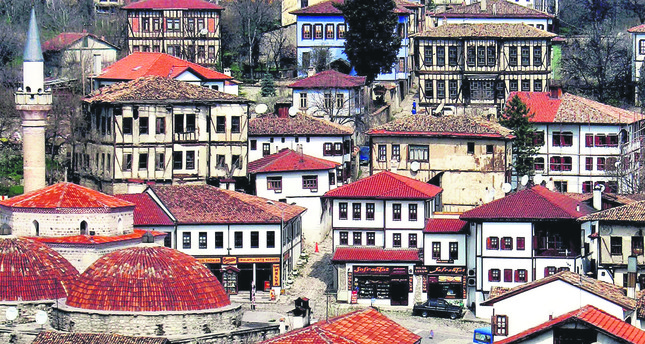 Safranbolu, a cultural asset on UNESCO's World Heritage List and notable for its incredible unique architecture, is the perfect weekend getaway. Featuring a photography tour with award-winning photographer İzzet Keribar, it offers visitors a chance to discover the captivating cultural heritage of this museum-city from March 5-6

Safranbolu is one of the most historical cities in the world with areas such as Beypazar, Traklı and Odunpazarı reflect the architecture of classic Ottoman cities. Famous for the unique architecture of the homes that were built there, Safranbolu was first featured on UNESCO's World Heritage List in 1994. Now, 22 years later, the weekend of March 5-6 will offer visitors a chance to embark on a journey through photography with İzzet Keribar, taking you to the heart of history, authenticity and Ottoman architectural aesthetics.

Located on the caravan route between Istanbul and Sinop during the economic and cultural rise of the Ottoman Empire, Safranbolu was a common destination for travelers seeking good accommodation. The city preserved its cultural heritage, and still reflects the traditional daily and social life of Turks to this day, along with its natural beauties.

The houses - which gave this city its rightful claim to fame - were built using an architectural style that reflects the life, culture, economy, technology and lifestyle of the 18th and 19th centuries. About 800 of the 2,000 traditional homes in the city are officially protected by the government.

During the photography tour, the village of Yörük and the district of Bağlar will feature examples of traditional architecture, while the Kaymakamlar Evi (Governor's House) is one of the finest examples of the Safranbolu houses. Furthermore, the Semerciler and Dericiler markets and the Arasta - where various chambers were located - the 17th century Cinci Inn and the first location settled by Turks in Safranbolu, the Hıdırlık Hill, will also offer magnificent views and are all featured on the tour.

A part of the Paflagonia region in ancient times, Safranbolu was conquered by the Lydian, Persian, Helenian, Roman and Byzantine Empire. During the 12th and 13th centuries, it was under the control of the Danishmends, the Seljuqs and Candaroğlulları (Isfendiyarids). Then, in the middle of the 15th century, Safranbolu fell under the reign of the Ottoman Empire. In the 19th century, it became a regional hub, and with the establishment of the Republic of Turkey, it became the first district of the province of Zonguldak. Finally, in 1995, it became part of Karabük. From Dadybra in the first age to Zalifre after it was conquered by the Ottomans, then Borglu to Taraklı Borglu during the Ottoman reign followed by Zağfiran-Borlu in the 18th century to Zafranbolu, Safranbolu's title has evolved throughout history. It finally became Safranbolu in 1940.

Within the district's center, there are around 2,000 traditional houses, all established during the 18th to 20th centuries. The houses are located in two separate areas of the town: "The City," otherwise referred to as the "Winter Houses' District," and "Vines," otherwise referred to as the "Summer Houses' District." Safranbolu is situated in a deep canyon unsuitable for agriculture, and the houses are built on slopes conducive to the terrain so that neighboring homes do not block the views of each other. The cobblestoned streets are durable against floods, and the plots are strategically constructed on slopes to minimize humidity. The houses are usually built as three-story houses with six-to-eight rooms, offering large living spaces. Each room is an independent unit suitable to accommodate a basic family unit, meeting all their needs. Each room has alcoves, shelves, stoves and ottomans. Furthermore, washstands are concealed in cupboards to allow ease when showering. Another unique quality of these houses is the wooden carpentry work on the ceilings. The consoles also offer variety in these houses, and there are pools within them to offer cool air and prevent fires. In the stonework of the first floors and on the upper floors, adobes and wood were preferred while tiles were typically used in construction of the roofs.
RELATED TOPICS